You found this red and blue robot
under a house you had to leave in Kew
and though its fist is empty of the gun
it once waved up and down up and down
you donate it to the toy box; it stands

almost as tall as your alien son
who knows all animals have daddies but not
which man is his own. He hugs the robot
to his chest to carry it outside, tells it
twice and sternly to get up when it falls

face down on the grass; after that,
does not persist. Later, he lays it on
the shiny lounge-room floor, spreads
a blanket over its legs. “Sleep,” he
instructs tenderly. The arms rest

stiffly parallel to the narrow-hipped sides.
He grabs his familiar teddy, sits watching
over the stranger, apparently satisfied
that it’s a law unto itself, a foreign territory
worth further study, or guarding.


As implied in this piece, Jennie Fraine is a single mum — to a son and daughter who are now adults. She lives with her mother and her daughter in a small town within commuting distance of Melbourne and works for Landmark Education, an international personal development company.

I like the understatement of this poem, and the subtlety of the metaphor. I happen to know that Jennie is an earth sign (Capricorn); perhaps that explains the sense of groundedness I find in many of her poems including this one. You can judge for yourself at her poetry blog. The list of her books is there too.

Online information about her is sparse. Neither that, nor what she says about herself at her blog profile, includes the information that her first book of poetry, The Cast Changes, was runner-up in the Anne Elder award the year it was published— a highly prestigious Australian prize for a first book of poetry. I know this because I was the publisher of that book! (Under my Abalone Press imprint, now discontinued.)

In the 1980s Jennie pioneered what she first called ‘on-the-spot’ and later ‘off-the-cuff’ poetry writing, and made her living by it for several years.  She now calls it Interactive Poetry. It involves asking people what poem they would like to write if they wrote poetry, and then writing it for them. Often there is a lot of talking back and forth to get the details, and they are asked if they want it to rhyme. The resulting poem is not just a regurgitation of their own words — it is crafted — but it does use many of their own words and tap into their own feelings, in a way that usually delights them. 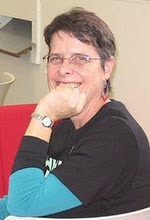 Email ThisBlogThis!Share to TwitterShare to FacebookShare to Pinterest
Labels: Budding Relationship, I Wish I'd Written This, Jennie Fraine