2
In our love    every day
could be the last
life on the endangered list
each kiss the first kiss
each touch the first caress
we have grown an arsenal of love
we have studied each other
become privately fluid
armed with steps and ritual
we battle thru.

3.
Our secret weapon
the slow waltz.

I first encountered Melbourne poet Ken Smeaton when he was with the Street Poets, who gave it away for free — handing out sheets of poetry on city streets — and I was with the Poets Union, whose members demanded payment — insisting on, and getting a fee for publication and performance. Nevertheless our aims overlapped. Both groups were keen to take poetry ‘off the page’ and present it orally, to show the public its relevance in the here and now. So we were always bumping into each other at festivals, concerts and performance venues, where we appreciated each other’s work. Ken and I ended up working together in the theatre poetry group Word of Mouth, collaborating with two other poets, Anita Sinclair, who was also our director, and Malcolm Brodie (who is immortalised here by another poet).

When I approached Ken about his inclusion in this series, he said, ‘Just take any poem out of Real Face.’ That was a treat! A long time since I’d read it, and I fell in love with his writing all over again. It’s so earthy, honest, original, and indeed real. But it was almost impossible to find a poem suitable for this purpose. He is the most Australian of poets in his idiom and allusions; for most of his pieces I would need to provide explanatory notes for international readers! For instance, his poem, ‘Rain. No Work’, which you can read at his blog, can be understood at face value by any reader, but I think you have to be an Aussie for the place names to conjure up pictures in your head, and for the gold nuggets and the flood to have deep historical associations. It’s my very favourite piece in the whole book; I’m mad about it — but if I’d chosen it for this post, it might have fallen a bit flat for most of you.

Luckily, I could wish to have written pretty much everything in the book, including this sweet reflection on love in domesticity, which does translate into the universal.


Ken behind the mic, then and now. (Photo with daughter Bella by Pamela Sidney, unofficial chronicler of the Melbourne poetry scene in the 80s - 90s, from her Melbourne Poetry Gig Guide blog.) : 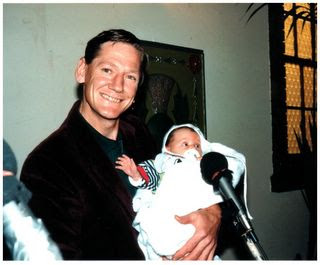 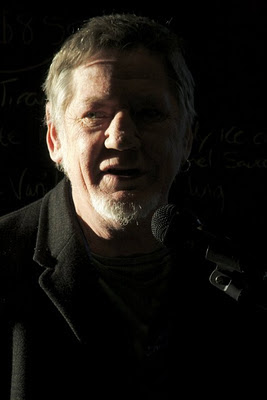 Email ThisBlogThis!Share to TwitterShare to FacebookShare to Pinterest
Labels: I Wish I'd Written This, Ken Smeaton, Real Face, War Dance