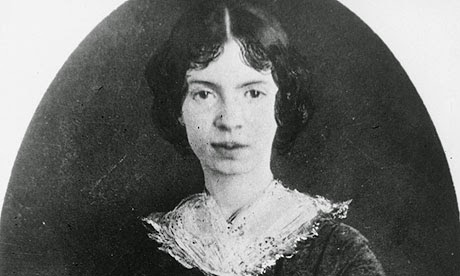 As Dickinson is very well-known and often quoted, I've chosen a poem and a picture which are not as widely disseminated as some others. (Although Wikipedia tells us that the best-known portrait of her is the only authenticated one, this is so like that I'll take a chance on it.)

She has become legendary as a reclusive spinster who was in poor health, did not live into old age, and was acclaimed as a poet only after her death.  There is truth in these details, but perhaps less truth in the supposition that she must have been frail and timid. An article in The Guardian in February 2010 suggests that she was a more lively character than that (and that her mysterious illness was possibly epilepsy).

Certainly the poems are strong and lively. You can read them at PoemHunter. Also her Complete Poems and various other volumes of her poems and letters are available from Amazon, and from Amazon U.K.

Her first editors cleaned up her idiosyncratic punctuation, changing her dashes to more conventional commas and such. The "corrected" versions are sometimes still published today. Luckily her original punctuation was later restored, and critics agree that the poems are better that way.

Try reading this poem aloud as it is written, with the dashes signifying longish pauses. You'll see that they also provide emphasis. Also note that they don't just automatically separate every phrase from its neighbours; obviously they are precisely placed. If you read it this way, the poem works. It springs to life.

Perhaps the tiger is a metaphor. If so, I don't think we're meant to know the underlying meaning. For me the poem is powerful even if I suspend disbelief and take the story literally.

Dickinson, along with Walt Whitman, is credited with giving American poetry a new voice — its own voice. What do you think?