The Simple Truth
By Philip Levine (1928-2015)
I bought a dollar and a half's worth of small red potatoes,
took them home, boiled them in their jackets
and ate them for dinner with a little butter and salt.
Then I walked through the dried fields
on the edge of town. In middle June the light
hung on in the dark furrows at my feet,
and in the mountain oaks overhead the birds
were gathering for the night, the jays and mockers
squawking back and forth, the finches still darting
into the dusty light. The woman who sold me
the potatoes was from Poland; she was someone
out of my childhood in a pink spangled sweater and sunglasses
praising the perfection of all her fruits and vegetables
at the road-side stand and urging me to taste
even the pale, raw sweet corn trucked all the way,
she swore, from New Jersey. "Eat, eat" she said,
"Even if you don't I'll say you did."
Some things
you know all your life. They are so simple and true
they must be said without elegance, meter and rhyme,
they must be laid on the table beside the salt shaker,
the glass of water, the absence of light gathering
in the shadows of picture frames, they must be
naked and alone, they must stand for themselves.
My friend Henri and I arrived at this together in 1965
before I went away, before he began to kill himself,
and the two of us to betray our love. Can you taste
what I'm saying? It is onions or potatoes, a pinch
of simple salt, the wealth of melting butter, it is obvious,
it stays in the back of your throat like a truth
you never uttered because the time was always wrong,
it stays there for the rest of your life, unspoken,
made of that dirt we call earth, the metal we call salt,
in a form we have no words for, and you live on it. 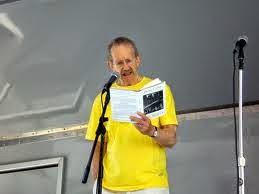 PoemHunter tells us that Philip Levine was 'a Pulitzer Prize-winning American
poet best known for his poems about working-class Detroit. He taught for over thirty years at the English Department of California State University, Fresno and held teaching positions at other universities as well. He was appointed to serve as the Poet Laureate of the United States for 2011–2012.'

More biographical details are at the Wikipedia link on his name, above; and an even more detailed literary biography is at the Poetry Foundation, were you will also find the wonderful poem, frequently cited as probably his best-known, What Work Is from the book of the same name. It's only because it is so well-known that I haven't chosen it to use here, as I like to give you something new. However it may be hard to do that with a poet of this stature, and I expect many of you will know this poem too.

I love it mainly for what it talks about, one version of everyday life — an everyday life very different form my own, and yet I too know the taste of small red potatoes boiled in their jackets and eaten with a little butter and salt. I know it from my own childhood.

And I like the way the poem also declares his poetics, without fanfare, slipping it in amongst the everyday details:

Some things
you know all your life. They are so simple and true
they must be said without elegance, meter and rhyme,
... they must be
naked and alone, they must stand for themselves.

When he began writing this way, it was new and innovative. Wikipedia points out that, 'The music of Levine's poetry depends on tension between his line-breaks and his syntax.'

His numerous books of poetry, criticism etc. can be found at Amazon, and there's a comprehensive collection of his poems at PoemHunter. (If, like me, the ads and the robot voice accompanying the poems there drive you mad and interfere with reading them, I've found a neat trick: I put my headphones on and turn them down so low that I can't hear anything.) You can listen to a number of examples of him reading his own poems, and participating in discussions, on YouTube. Let me recommend The Philosophy Lesson, a real treat (short and funny).

The Poetry Foundation tells us that Levine was born and raised in industrial Detroit, and that he

resolved “to find a voice for the voiceless” while working in the auto plants of Detroit during the 1950s. “I saw that the people that I was working with … were voiceless in a way,” he explained in Detroit Magazine. “In terms of the literature of the United States they weren’t being heard. Nobody was speaking for them. And as young people will, you know, I took this foolish vow that I would speak for them and that’s what my life would be. And sure enough I’ve gone and done it. Or I’ve tried anyway.”

I love him for it!

He died in February this year, aged 87.