When the warm sun, that brings
Seed-time and harvest, has returned again,
'T is sweet to visit the still wood, where springs
The first flower of the plain.

I love the season well,
When forest glades are teeming with bright forms,
Nor dark and many-folded clouds foretell
The coming-on of storms.

From the earth's loosened mould
The sapling draws its sustenance, and thrives;
Though stricken to the heart with winter's cold,
The drooping tree revives.

The softly-warbled song
Comes from the pleasant woods, and colored wings
Glance quick in the bright sun, that moves along
The forest openings.

When the bright sunset fills
The silver woods with light, the green slope throws
Its shadows in the hollows of the hills,
And wide the upland glows.

And when the eve is born,
In the blue lake the sky, o'er-reaching far,
Is hollowed out and the moon dips her horn,
And twinkles many a star.

Inverted in the tide
Stand the gray rocks, and trembling shadows throw,
And the fair trees look over, side by side,
And see themselves below.

Sweet April! many a thought
Is wedded unto thee, as hearts are wed;
Nor shall they fail, till, to its autumn brought,
Life's golden fruit is shed.


Usually I come across a poem which makes me think, 'I MUST have that for Poets United!' for one of my Friday features, whether 'I Wish I'd Written This', 'The Living Dead' or 'Thought Provokers'. This time, instead, I thought first, 'I'd love to find an April poem to use' – what with it not only being April, but April being Poetry Month to many of us who are busy writing a poem a day, whether to prompts or from our own inspiration. So, not having a particular poem in mind this time, I had to look for one. I Googled April poems. 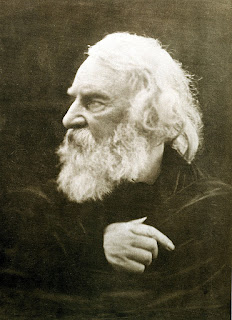 There were various good ones, but I couldn't go past lovely Longfellow. Not only was I brought up on his 'Hiawatha', also this poem stood out for me for its musicality, which made it more accessible than the other April poems using older versions of the language. I see from the Wikipeda entry on Longfellow that his poems were 'known for their musicality' and am reminded that the full title of the major work I just mentioned is 'The Song of Hiawatha'.

He was also known for liking to use 'stories of mythology and legend', and of course my beloved 'Hiawatha' fills that bill. I had not realised what a lovely nature poet he could be, too. Silly of me! 'Hiawatha' is full of a deep love and respect for nature, presented through Native American ideas and practices.

Nowadays we might wonder at the correctness of his appropriating indigenous stories; at the time, I think, white writers had no consciousness that this might be inappropriate (at the very least). Leaving aside the question of doing it at all, it seems to me that his writing was respectful of the subject matter – although it's rather  startling to read in Wikipedia that part of his inspiration for 'Hiawatha' came from Finnish legends!

What can I say? I was a child, my Dad read 'Hiawatha' to me and my brother as a bedtime serial, and we loved it. I still love it.

The most popular poet of his day – and one of those who is still recognised immediately by surname only – Longfellow has been criticised since for being 'minor and derivative' and indeed for appealing to the masses. (Something which has also been seen, in some quarters, as a deficiency in Mary Oliver!) That last seems to me very skewed thinking. How I would love for my own poetry to have mass appeal! How I would love for poetry in general to be so widely appreciated!

Similarly, he has been belittled for the fact that his work is loved by children. As he was one of the influences who made this child love poetry and try to write it, I can hardly deplore that either.

His poetry is still readily available via Amazon, including some Kindle and Audible editions. (I have 'Hiawatha' of course – in a hardback I've had for decades, inherited from my father – but I find ebooks much easier now, so I've grabbed that version too.)

Well, that was a long 'aside'! The poem I've shared with you today is nothing to do with 'Hiawatha' but it does have the lyricism which was the poet's trademark, and it's full of joy – even with the hint of mortality at the end. In my part of the world April is not the Spring renewal he describes, but for many of you it is – and the poem is so celebratory that I simply can't be pedantic on such a point. I hope you all enjoy it too.

This photo of Longfellow was taken by Julia Margaret Cameron in 1868, and is in the Public Domain.