Three poems by Mal Morgan
(all from Throwaway Moon: New and Selected Poems)

inside the wire compound
classified as psychiatric

I greet you    morning

your mouth
wide and blue as sky

smell of musk
the earth’s bowels      grass and flowers

streets      too straight for ordinary thieves

I steal a patch of green


Mal wrote longer poems too, but these three short pieces are the ones I’d most wish to have written — posted here in the order in which I’d most wish that, which happens to be the reverse of the chronological order. There are plenty of others I admire but wouldn’t wish to have occasion to write, particularly those in his last book, Beautiful Veins, written in the knowledge that he was dying of cancer. (He lived to attend the book launch.) But they are not morbid poems. Mal was good at confronting the human condition, and doesn’t shirk it in his last poems; nevertheless they are as wry, whimsical and celebratory of life as those in his previous six volumes. He regarded himself as a surrealist poet, and admired Breton and Apollinaire. I found his work far more accessible than most of the current surrealist writers I’ve encountered. He was an ethnic, though not religious, Jew and this too formed an important strand in his writing.

I first met him in the early eighties when he was editing a magazine called Parachute Poems and I submitted some work. Our correspondence about those poems was the beginning of a friendship that lasted the rest of his life. He was a pharmacist, and in those days worked in the city of Melbourne. I think just about all the poets in Melbourne used to drop into his shop when they were in town, to hang out in the back room for coffee and chat between customers. He hated the commercial side of pharmacy, ‘selling lipsticks and toilet paper’ as he scathingly remarked, and later worked at the Children’s Hospital for less money but much more job satisfaction.

Like our mutual friend Shelton Lea, whom I met when he and I happened to drop into the pharmacy at the same time, Mal was something of a mentor to me when I was beginning to go public as a poet, and later I became the publisher of his third book, a handshake with the moon.

I was by no means the only poet he encouraged. He convened monthly poetry and short fiction readings for several years at La Mama (a small theatre in Melbourne, famous for presenting new and innovative stage plays, some of which went on to become mainstream). For a few years after that, he ran the annual, national poetry and arts festival at the equally famous artists' colony, Montsalvat, in the hills outside Melbourne. He was greatly loved for his generosity of spirit, cheeky humour, and laid-back libertarian philosophies.

Mal was also an editor. This photo, used with permission, was snapped at the the launch of La Mama Poetica, a large anthology of work by poets who had read there over the years. Mal edited it and oversaw the production, and a fine production it is. On the strength of it, Pariah Press, of which I was a member, asked him to publish an anthology of members’ work. He did a very good job with that, too. It was called Walking the Dogs, and is available at various places online, but does not include any of Mal’s own work. 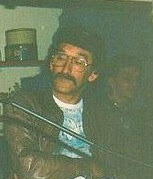 Photo Pamela Sidney ('unofficial' photographer of the Melbourne poetry scene in the eighties and nineties)
from her blog, Melbourne Poetry Gig Guide.

You can download some of his poetry — and a whole heap of other good reading — in the Cordite Review #9. Also look for him, again amongst many other fine Australian poets, in Divan #1.  His books were:

You can find several available to buy if you Google, particularly the last volume, with its cover portrait by his second wife, the artist Di Morgan. (Others of her paintings of Mal adorn the covers of three of his other books.)

(And sorry, I've done it again. I do get so mixed up about the time diff.)

Email ThisBlogThis!Share to TwitterShare to FacebookShare to Pinterest
Labels: I Wish I'd Written This, Mal Morgan