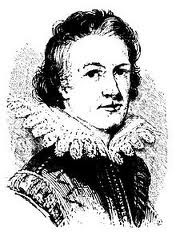 This Life, which seems so fair,

is like a bubble blown up in the air

who chase it everywhere

and strive who can most motion it bequeath.

And though it sometimes seem of its own might

like to an eye of gold to be fix’d there,

and firm to hover in that empty height,

that only is because it is so light.

But in that pomp it doth not long appear;

for when ’tis most admired, in a thought,

because it erst was nought, it turns to nought.

Sir William Drummond was well educated, earning his M.A. and a law degree. Devoted to a branch of the royal family, The Stuarts, he is fabled to have died from grief after the passing of Charles I. His poetry was popular with the bourgeois during the Elizabethan revival at the end of the eighteenth century.
Some have ventured a genealogical connection to Lady Diana Spencer.
Posted by Unknown