I hope those of you that celebrated the 4th of July had a safe, happy holiday!  Today we are going to use art, to inspire our muse.  Our artist today is Jackson Pollock.  Honestly, I have mixed feelings about his style. There is something about his paintings that intrigue me.   Jackson Pollock was known for his abstract style,Pollock's most famous paintings were made during this "drip period" between 1947 and 1950.  His technique was called 'drip and splash'.  He didn't use a traditional easel, but put canvas on the floor and would proceed to pour and drip his paint, from a can. He did not use paint brushes. He liked to use sticks, knives and trowels as his brushes. Sometimes he would mix broken glass, sand or other foreign objects into the paint. His work was influenced by other Surrealist artist.
His paintings were a major influence in the abstract expressionist movement.   His action type painting was thought to be a direct result of his mood.

"He became wildly popular after being featured in a four-page spread, on August 8, 1949, in Life magazine. The article asked of Pollock, "Is he the greatest living painter in the United States?" The Life article changed Pollock's life overnight. Many other artists resented his fame, and some of his friends suddenly became competitors. As his fame grew, some critics began calling Pollock a fraud, causing even him to question his own work. During this time he would often look to Krasner to determine which paintings were good, unable to make the differentiation himself." *****

I'd like you to dabble with our prompt #104 Jackson Pollock. I can't imagine painting with sticks and glass.  Can you?    Pen a poem adding your own drips and splashes!  I look forward to your art work :D 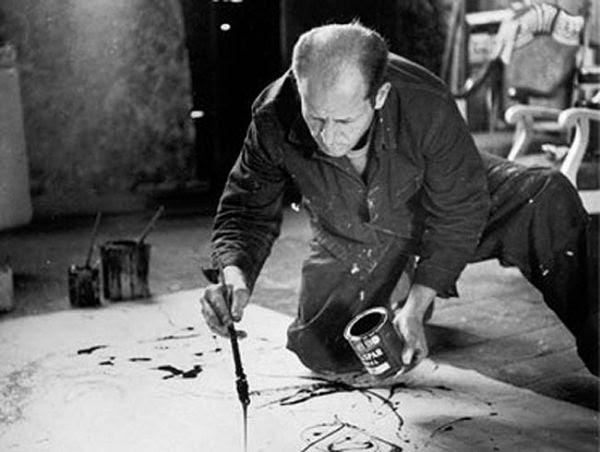 Pollock's art was subject to much sarcasm,  in 1956 Time magazine called him `Jack the Dripper'.

There is mystery in his work. Here is an article decoding his style.
Some say they can see letters in his paintings. Some believe he signs his name, or maybe another word, or message.  What do you think?!

Here you can view many of his paintings for further inspiration.

There is a painting app for Jackson Pollock here.
More info about his life here.


On the floor I am more at ease, I feel nearer, more a part of the painting, since this way I can walk around in it, work from the four sides and be literally `in' the painting.
-- Jackson Pollock, 1947