Ethiopia! They used to say,
Fluting at dawn through pure, clear rills of sound,
The magpies of that earlier day,
Ethiopia! Ethiopia! From all around.
Dulcimer of no Abyssinian maid
Was ever so plangent or so doucely played.
Ethiopia, Ethiopia!
Echoes went through me of Mount Abora.

Another country, another age! I still
Hear them at early morning in the trees;
The same pure grace notes, the same exquisite trill,
The lilt, the liquid ease,
But not the enchantment of that warbled name;
The magpie dialect here is not the same;
The magic syllables have gone
That brought me full awake and roused the sun.

Lost Ethiopia. Is that loss in me?
Monaro magpies bursting into song
Soar through new cadences, fresh jubilee;
But in an unknown tongue
Rejoice. Can it perhaps be true
That I have lost those languages I knew
In boyhood, when each bird,
Stone, cloud and every tree that grew
Spoke and I had by heart all that I heard? 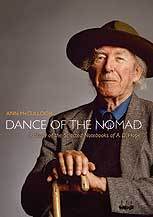 Alec Derwent Hope is one of the most renowned of Australian poets — for his wicked wit, his unashamed erotica, his insistence on formal rather than free verse, and above all his brilliance. He was both loved and revered in his lifetime, and was a friend and mentor to a number of other poets. I didn't know him well personally — we lived in different cities and only once appeared on the same poetry festival program, by which time he was a sort of 'elder statesman' of Australian poetry, though unpretentious in person — but we had mutual friends with whom he was popular.

He worked as an academic and was also known as an astute, if sometimes stinging critic. Further details of his life and distinguished career can be found at the Wikipedia link on his name, above, at PoemHunter and at Australian Poetry Library.

You can read further samples of his work at Famous Poets and Poems, or a comprehensive selection at Australian Poetry Library. One Tony Vaughan-Johnston gives a splendid reading of five of Hope's poems on Youtube. Some of his books are still available on Amazon.

And why would I wish to have written this particular piece? The Australian magpie (pictured), which is a different species from the European and Asian magpies, has a most beautiful song which I love to hear. Our literature refers to 'carolling magpies' and their 'liquid notes'.

I grew up in Tasmania, and Hope is quite right in everything he says about the Tasmanian magpies' particular call.

So, in posting this poem, I am both indulging and alleviating a touch of homesickness.

Email ThisBlogThis!Share to TwitterShare to FacebookShare to Pinterest
Labels: A.D. Hope, Alec Derwent Hope, I Wish I'd Written This