How splendid in the morning glows the lily: with what grace he throws
His supplication to the rose: do roses nod the head, Yasmin?

But when the silver dove descends I find the little flower of friends
Whose very name that sweetly ends I say when I have said, Yasmin.

The morning light is clear and cold: I dare not in that light behold
A whiter light, a deeper gold, a glory too far shed, Yasmin.

But when the deep red eye of day is level with the lone highway,
And some to Meccah turn to pray, and I toward thy bed, Yasmin;

Or when the wind beneath the moon is drifting like a soul aswoon,
And harping planets talk love's tune with milky wings outspread, Yasmin,

Shower down thy love, O burning bright! For one night or the other night
Will come the Gardener in white, and gathered flowers are dead, Yasmin.


My regular Friday post, 'I Wish I'd Written This' deals with 20th and 21st century poets, specifically those alive from 1939 on, which is my birth year. I figure, if they've been alive in my lifetime, they're contemporary enough even if no longer with us. Now I'm going to alternate 'I Wish I'd Written This' with 'The Living Dead', poetry from further past — in which the words are still vibrant with life even though all their authors have passed away.

In my spiritual tradition — and no doubt many others — it is customary to honour the ancestors, which may be one's spiritual as well as genetic ancestors. I like to think that the poets of the past  — the unknown as well as the famous — are our spiritual ancestors as we make poems today.

James Elroy Flecker, a fairly recent poet, had a sense of this kind of legacy. Perhaps his most famous poem is one called To a Poet a Thousand Years Hence; and another very famous piece, the Prologue to The Golden Journey to Samarkand (often quoted as if it were the whole poem) addresses the raison d'etre of poets.

But this week Susan, in her Mid-Week Motif, has us writing of love, and my very favourite Flecker poem is this beautiful and impassioned love poem, in one of my favourite forms, the ghazal (which he spells ghazel). 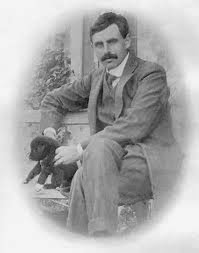 You can learn more about Flecker at the link on his name, above, and find more of his poems at PoemHunter (where there are misprints in this one: e.g. it gives 'deep red eye of day' as 'deep red light of day' and 'glows the lily' as 'grows the lily' — but believe me, I've got it right. I was brought up on Flecker.).

His Collected Poems is available at Amazon, and there is a Kindle edition. Google will also find you copies of this and his other books from various sources, often second-hand bookstores.

When he died aged 30, people compared his premature loss to that of Keats. I don't think Flecker was anywhere near so great a poet as Keats, but he was a very beautiful, sensual poet who used language in a distinctively musical way. I think his work is uneven, but his best poems are gorgeous, with immediate emotional impact. Their words still speak to me as if they were freshly written.