I will kiss
the feet
of my mother.
I am not ashamed
to bow down
towards grass, wet
with clear sky
water. I will bow
down to her
who birthed me,
in whose center
I was housed,
in whose waters
I swam,
from conception
to the coming out.
Bow down
to her
who gave me
life, kiss the flesh—
each digit
achy with gout,
the tireless travel
of the old,
the bearing
of things unseen.

Harvester of wheat
and planter of seeds,
the farmland
and the plow,
where her hands
touched soft,
cold earth
crumbling
through fingers,

the bearing
of flesh
that rose up
out of her,
rising still,
her children’s
children,
and then theirs.

I bow down
to my human statue,
my stronghold.
Sun comes down,
and the light
around her head
is white. And I, last
born, on my knees
before her, kiss
the bones underneath
the skin, the toes
that ache with years,
eighty-one peeled down
like skins
of island fruit,
each one bearing
sweet flesh within,
and the bitter pit
we all must come to.

This she plants again
and sees it rise, not
from windows,
but from her place
in skies,
when, after years,
she will go on
living in clouds,
between suns,
looking down
on this ground,
where her feet stood,
planted.

From SOMEWHERE BETWEEN MEXICO AND A RIVER CALLED HOME, Pecan Grove Press, 2004 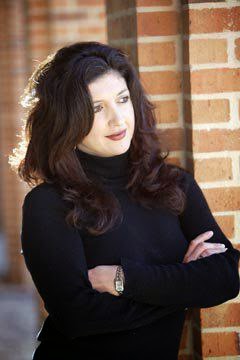 I met Marian Haddad in Texas in 2006 when I attended poetry events there, and was very impressed by the strong, woman-centred poetry I heard her read. More recently we've reconnected on facebook, where she shared this wonderful poem in which her earth mother almost becomes Mother Earth, equally sacred. Marian, a devoted Christian with a deep sense of the mystical, also appreciates the practical, physical world.

Her latest collection, Wildflower, Stone is available on Amazon.  Somewhere Between Mexico... can be obtained from various sellers.

You can see her on YouTube in a  joyous discussion of her spiritual journey and artistic process, which cannot be separated.

A pushcart nominated poet with an MFA degree, she sent me the following details of her career, which I reproduce in full:

Marian Haddad's, most recent collection of poems, Widlflower. Stone., was published in 2011 by Pecan Grove Press (Ed., H. Palmer Hall).  Yusef Komunyakaa states that this collection, "celebrates the observable mysteries of daily existence ... these poems have dropped all disguises, and each rides the pure joy of music. There are superb leaps and silences that deftly highlight the monumental in simple things."

Author Denise Chavez states, "This luminescent and powerful collection of poems...navigates home and heart, spirit and being...The collection is wise, brave and ever curious."

In Former First Lady Laura Bush's Spoken from the Heart, she references Marian Haddad's description of the light in El Paso: "Texas poet Marian Haddad wrote once about El Paso, 'The sun is different here.' 'Drastic and dense,' she called it, and it truly is."

Haddad's latest collection...is often steeped in this West Texas and Southern New Mexico light---as well as the often-clouded light over the Texas Gulf Coast and the Southern California coastline---and this light travels , as well, with Haddad through the Texas Hill Country.

This book follows Haddad's previous collection, Somewhere between Mexico and a River Called Home (Pecan Grove Press, 2004) and in which this poem, "Reverence" appears, which was endorsed by Naomi Shihab Nye, Abraham Verghese and Marilyn Chin, and which approached its fifth printing before the sad passing of Pecan Grove Press editor, dear H. Palmer Hall. Her chapbook, Saturn Falling Down (2003), was published at the request of Texas Public Radio in correlation with Hands-On Poetry Workshops. Her works-in-progress include a collection of personal essays about growing up as an Arab-American in a Mexican-American border town. Her work has been featured on/in various media venues, including The Hallmark Channel and The Huffington Post.

She has taught at St. Mary's University, Our Lady of the Lake, and Northwest Vista College; she works as a manuscript & publishing consultant where a number of clients have won or placed in various literary and book contests, to include The Ashland Poetry Prize, The Texas Review Poetry Prize, The Crab Orchard First Book Award, Wings Press chapbook award, and numerous other awards.  She is also a lecturer, panel moderator, visiting writer, and workshop instructor and is the recipient of an NEH fellowship.

Email ThisBlogThis!Share to TwitterShare to FacebookShare to Pinterest
Labels: I Wish I'd Written This, Marian Haddad