The Queen was in her chamber, and she was middling old,
Her petticoat was satin and her stomacher was gold.
Backwards and forwards and sideways did she pass,
Making up her mind to face the cruel looking-glass.
The cruel looking-glass that will never show a lass
As comely or as kindly or as young as once she was!

The Queen was in her chamber, a-combing of her hair,
There came Queen Mary's spirit and it stood behind her chair,
Singing, “Backwards and forwards and sideways may you pass,
But I will stand behind you till you face the looking-glass.
The cruel looking-glass that will never show a lass
As lovely or unlucky or as lonely as I was!”

The Queen was in her chamber, a-weeping very sore,
There came Lord Leicester's spirit and it scratched upon the door,
Singing, “Backwards and forwards and sideways may you pass,
But I will walk beside you till you face the looking-glass.
The cruel looking-glass that will never show a lass
As hard and unforgiving or as wicked as you was!”

The Queen was in her chamber; her sins were on her head;
She looked the spirits up and down and statelily she said:
“Backwards and forwards and sideways though I've been,
Yet I am Harry's daughter and I am England's Queen!”
And she faced the looking-glass (and whatever else there was),
And she saw her day was over and she saw her beauty pass
In the cruel looking-glass that can always hurt a lass
More hard than any ghost there is or any man there was! 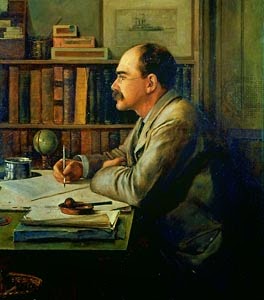 Yes, well, I guess you have to know your English history, which I suppose not everyone in this international audience will. But maybe the palpable emotion of it carries you past the need for factual detail. I hope so! It's one of my favourite things, largely for that emotion ... but enhanced, I confess, by having been brought up on romanticised stories of English kings and queens. Back then, when I was growing up, Australians called England "the mother country" — and to this day Elizabeth II is Queen of Australia as well as Britain.

The poem is about Queen Elizabeth I, whom I've admired since my childhood. But although she was a great leader of her country, she was not perfect, and they were difficult times. She imprisoned and eventually executed her cousin, Mary, Queen of Scots who sought refuge in England. She allowed Robert Dudley, Earl of Leicester to believe for many years that she might marry him one day, and was very jealous and possessive towards him, yet ultimately decided to remain single. Both these decisions could be seen as matters of political expediency — and/or they could be viewed as being in the best interests of the kingdom. In any case both Mary and Leicester had cause to reproach her, and the memory of what transpired might well have played on the mind of the Queen as she aged.

That's by way of background. Poetically I find it quite moving, and at the end very stirring —thrilling in its defiance. I want to cheer her on! And then the poem falls away on a melancholy, yet philosophical note. We get old, our day passes. There's an inevitability about it when all's said and done.

Kipling's one of my favourite writers, for his fiction as well as his poems. In this poem his use of rhyme, metre and other devices is masterly in creating the moods and effects he wants. (It comes from Rewards and Fairies, stories for children.)

He was a prolific writer for adults and children, in various genres, and was much admired by the likes of Henry James and T. S. Eliot, who nowadays I think are considered greater writers than Kipling. There was no-one quite like him, and among other things I think he was a great entertainer. Read all about his many writings and his interesting life at the Wikipedia link on his name, above. And here is a site where you can read many of his works online. One that is not there, his novel Kim, is available here as a free ebook. (Hang on a minute while I grab my copy. Oh, how I loved that book in my youth.) He also has a number of pages on Amazon.

There's so much to say about Kipling, it's hard to stop. But above all, I hope you enjoy the poem.

P.S. And then there's a little more to say — in Susan's and my comments below.