As fair art thou, my bonnie lass,
So deep in luve am I:
And I will luve thee still, my dear,
Till a' the seas gang dry:

Till a' the seas gang dry, my dear,
And the rocks melt wi' the sun:
I will luve thee still, my dear,
While the sands o' life shall run. 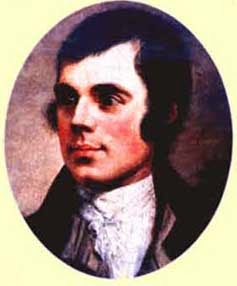 I said to a friend earlier today that poets don't become celebrities. I have to admit, this one did — though, like most, even more so after his death.

Reading the Wikipedia article (link on his name, above) I've just discovered that his wide popularity is not only in the English-speaking world but also in Russia where, in translation, he was regarded as a poet of the people. Which indeed he was.

I'm sorry if it's disappointing that I chose a poem many of you will know well. It's hard to choose a Burns poem that isn't familiar, but this one is probably his best-known. I didn't set out to pick this one, but couldn't go past it; it really is so beautiful. I think it rivals "Greensleeves" as the ultimate love poem. And like that one it is a song. Burns wrote songs as well as poems, and adapted or rewrote Scottish folk songs.

Should I have mentioned that he was a Scot? I think that too is very well-known. The funny spelling in the poem above is because it's written in a Scottish accent. If you'd like to hear it sung, Kenneth McKellar was long considered the best interpreter, but I just listened to Bryn Terfel and thought his wonderful voice gave an even better performance. Then I heard Scottish folk singer Karen Matheson (who used the simple expedient of changing the word "lass" to "love" to turn it into a woman's song) and thought yes, it was really meant to be sung simply like this, rather than the operatic treatment. Well, take your pick! They're all gorgeous. And after all it's the poetry I'm here to discuss rather than the music.

Burns is one of the most musical of poets, however. Which is not surprising, considering that many of his poems were in fact songs. Yet the music is not only in the tunes but the lyrics. Simple words, these, but how beautiful! And how timeless the sentiments. A million greeting cards try to get this effect and fail.

You can find more of his poems at PoemHunter (what would we do without PoemHunter?) and on his Amazon page you can find his poems, songs and letters in abundance, as well as biographical and critical works about him.

Burns was the fore-runner of the Romantic poets, and A Red, Red Rose is perhaps the most perfect expression of romantic love. Like some of the Romantics, he was not the most faithful lover, but was clearly a passionate one. I'm sure he truly loved the two most important women in his life: his wife Jean Armour who bore him many children, and Mary Campbell who died young of typhus.

Burns himself didn't live long. It's surprising to realise he was only 37 when he died, and even more surprising that he managed to create such a body of writing (including prose) even while having to work hard — and not very successfully — for a living.

And I'm wrong — A Red, Red Rose is not his very best-known poem. Think of him next time you sing Auld Lang Syne.