Setting aside a mask, or several
she plays, as when a child
pressing against
the beaten bronzed air
stroking the shiny surfaces of afternoons
as they drift;
finds and picks out from faded grass
or from between the leaves
of now shelved books
the different gifts
for the ones she loves, kneels
and hands up to them, with no words
their four-leafed presentations. 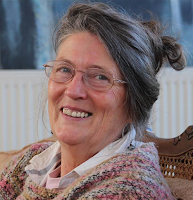 Linda Stevenson is one of my oldest and dearest friends. We sat next to each other in Library School (Melbourne) when we were young women, though we spent the first few weeks talking to the students either side of us in the brief breaks between listening to lectures. Once we did start talking to each other, though ... well, it's been a lifelong habit ever since, though now we live in different parts of the country and mostly do it on facebook. Poetry didn't bring us together, but as we were both writing it, it soon became a bond. We have collaborated on various projects over the years, in support of other people's poetry as well as each other's. There was a time when our library careers merged briefly and she was my boss – but it is now decades since both of us left that career for more artistic pursuits.

So there's my interest declared! However I'm sure you will have no trouble believing that I like the poem for its own sake, regardless of who wrote it. I wanted to use it now, in the lead-up to Christmas, because it describes gift-giving – and because this is as close as I can get to Christmas, being the last 'I Wish I'd Written This' until the new year. (You'll have a 'Living Dead' post next Friday.)

Linda still lives in Melbourne, and describes herself as 'having a background of environmental interests and community service'. She is a painter as well as a poet, whose work has been exhibited in local venues. She once ran a printing studio using a special technique to create art prints, and gave classes. I asked her to share one of her paintings with us (see below).

This is how she tells it:


I've always written poetry, but sporadically.  Always read and appreciated poetry.  Don't consider myself a "poet" because I haven't dedicated the time and effort necessary.  I respect and admire the work of my true poet friends, colleagues and acquaintances who have that commitment.

Now in the latter phase of life, I have also become a painter, and am working to integrate my visual art work with my writing. The painting here is inspired by C.P. Cafavy's great iconic poem "Ithaca". I paint as I feel, with images, symbols and references to create a work which has meaning. There are analogies with writing a poem...inspiration and energy, followed by analysis, crafting, deleting, adding and refining to achieve a worthwhile end. 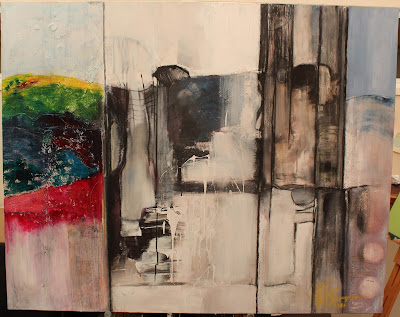 Last year, I commenced hosting private Salons at my home in Frankston.  Salons in 2014 featured recent paintings by local artists and readings by local poets. More are planned for next year, with music performances to be added to the mix. The keynotes of the Salon are "Creativity. Conviviality, and Compassion". People who have attended so far loved the poetry readings in my studio; it was an opportunity for intimate poetry performances to be integrated with visual artworks, and for some new poetry fans to be enthused.

(Poets United recently featured Cavafy's poem in 'The Living Dead' – if you'd like to re-acquaint yourself with Linda's inspiration.)

Linda does plan to create a blog to share her work, but at present you can only find it on facebook. In view of that, and as 'Clovers' is a shortish piece, I'll treat you to another – with a rather different message.

I remember Joan Baez saying that 'What Have They Done to the Rain' (by Malvina Reynolds) was the gentlest protest song she knew. I expect you are familiar with it, but if not, it's an environmental protest. Baez added that the message was not gentle, but the song sounded gentle.  The following poem of Linda's is one of the gentlest environmental protest poems I know. That is, it sounds gentle and conjures up some gentle images (among others) but the message is heart-rending.  The background story is here.

At a time of year when many of us are focused on thoughts of love, these are, in different ways, two loving poems.

It pares down
to the palest of skies
to a native fledgling
thirsty, untended

carrying the young bird
with us
as our token.

Email ThisBlogThis!Share to TwitterShare to FacebookShare to Pinterest
Labels: C.P. Cavafy, Cavafy, I Wish I'd Written This, Ithaka, Linda Stevenson