The mystery the fabled Phoenix knows:
There is a time to depart
A time to arrive
A door to close
A door to open into light

In From the Night' (privately published, Melbourne, 1976).


What beautiful language! What gorgeous imagery! What ease and skill! 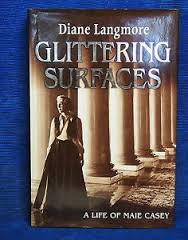 Maie Casey (aka Lady Casey / Baroness Casey) was an extraordinary woman, of many achievements. Her husband Richard, Baron Casey, was also a person of achievement, both in his political and diplomatic careers and in the field of science (he was an engineer).

He was at one time Treasurer of Australia, held other ministerial positions in Government, and at various times was ambassador to the USA, Governor-General of Australia, Viceroy of Bengal, and – while remaining Australian – a member of the British House of Lords. (Not exactly in that order; his Wikipedia entry gives more details, and there's a lovely article at the Australian Dictionary of Biography.)

His wife's achievements were more in the realms of art and literature; also she brilliantly supported his career in public life, as a glittering hostess and patron of the arts. During her time in India, where she became friends with Jawaharlal Nehru and Lady Edwina Mountbatten, she did much to try and lift the status of Indian women.

The link on her name (above) is to Wikipedia. The events of her life are detailed more excitingly in the blurb to Glittering Surfaces, her biography by Diane Langmore. (Sadly the book itself, which must have been a fascinating read, is now out of print.)

Maie Casey took part in Australia's first all-women air race after she and Richard both took flying lessons. Husband and wife were obviously a great team in all sorts of ways, although she also conducted her private life as a lesbian. (This seems to have been a fairly open secret in some circles, but not known to the general public of her day.) They had two children, but a reputation of having been rather cold and distant parents.

She studied art with a renowned Melbourne teacher called George Bell, whom every aspiring artist of the time – and many established ones – wanted to learn from, and was great friends with some of Australia's foremost artists, e.g. Russell Drysdale. It appears that she continued to paint and sketch throughout her life; however I can't find any online examples of her work.

Her writing is very much a matter of record, however. She wrote autobiographical volumes, and also biographies (including one of Dame Nellie Melba) as well as collaborating on a one-act opera.  She published two volumes of verse: Verses in 1963 and From the Night in 1976 (the year her husband died).

The latter volume, beautifully illustrated by Australian artist Frances Burke, is one of my most treasured possessions. It was a birthday gift long ago, from friends who knew I would cherish it – not because of the identity of the author so much as the beauty of the poetry, and the fact that when it was given to me in the eighties it was already quite rare.

However, the identity of the author is certainly interesting. I'll give the last word to the Biographical Note accompanying the national collection of her papers:

Maie Casey was a woman of paradoxes. Possessed of charm and wit, she could be manipulative and ruthless. A steadfast friend to many, she was a cold and inattentive mother. Although bohemian in her private life, she was a snob. Not conventionally beautiful, she attracted, and was attracted by, a host of men and women, but she remained a devoted wife to Richard Casey, channelling much of her formidable energy into promoting and supporting his career. A friend, Lady Drysdale, judged that she was `napoleonic’.

Poems and photos posted to 'The Living Dead' for purposes of study and review remain the property of the copyright holders.
Posted by Rosemary Nissen-Wade