5 am still dark motorbike dew
night's nectar no one awake

speed sheer round curves
mangroves to the right

hide in excess of orchids
trespass the garden

hint of breeze furrows
the water with tropic code

sunrise over the secret
this time revealed or not 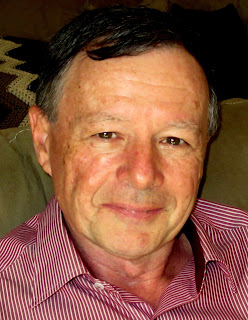 Tony Page is an old friend and poetic colleague. In the eighties we were both involved in many of the poetry events and activities in and around Melbourne. We met at a writers' conference, and our first books had the same publisher. We were pals who socialised with each other, and with much the same people amongst the Melbourne poets of that time. Then I moved interstate and he moved to another country. I'm still where I moved to, but he's been back in Melbourne since 2012, having retired after 20 years of living and working as a teacher in Thailand and Malaysia.

This poem, he says,

refers to my many visits to Krabi, in Sthn Thailand (before it got over run by tourists & erected a TWO STOREY McDonalds!!)


I'm glad he had an earlier relationship with the place, which has given us this beautiful poem.

Dawn the Proof is his fifth book. Its back cover blurb notes that he 'has read from his work at the Edinburgh Arts Festival, the Venice Conference on Commonwealth Literature, Shakespeare & Co in Paris, plus venues in the USA. As a theatre director he has mounted amateur productions of Shakespeare, Beckett and Brecht, among others, in addition to writing and collaborating with student groups.'

He makes retirement sound busy! This is what he's been up to since his return to Australia:

The past 4 years, I've been tutoring at U3A, two courses:  "Twentieth Century Drama"   and "Poetry Across the Centuries".  This has been so different from my long experience in High Schools, that it's added a whole new dimension to my life.  I continue to travel widely, last year venturing to Iran, Uzbekistan and Turkmenistan.  Since retiring from full time work 9 yrs ago, I've been to some pretty hairy places, including the Gobi desert in Xinjiang province, Syria, Botswana, Zimbabwe etc. From now on though, will only be going to 'quieter' countries. For the first 5 yrs of 'retirement', took up painting lessons & Classical Greek - both of which I'd wanted to do all my life but never had the time.

At present, however, the painting and Greek lessons are 'suspended' for the sake of poetry. He hopes to get back to them.

(U3A – which might be solely Australian nomenclature for all I know – means University of the Third Age. With branches Australia-wide, it offers low-cost educational opportunities to senior citizens, in the form of short courses on a great range of subjects. Here is Tony's U3A listing, with relevant details of his background and previous career.)

I am lucky enough to have visited some parts of South-east Asia, though not Thailand or Malaysia. I've also spent time in the tropical regions of Australia. I love this poem for what it evokes of such places – simultaneously stirring my memories and giving me a glimpse of somewhere unknown to me.

I am also fascinated by the fact that it's completely unpunctuated and he's made that work. (I'm making mental notes to myself to try it some time soon.) It reads almost like stream-of-consciousness, yet it's clearly not written like that; it's carefully crafted to give that effect, showing the movement, moment-by-moment, of both bike and man, and then the arrival.

The link on the book title, above, takes you to the publisher's website where it may be purchased. It is reviewed here. It's full of lovely work, both about his overseas experiences and his return to Australia, seeing this country through the filter of memory and yet coming to it afresh after so long living elsewhere.

He doesn't have a body of work online, but if you Google 'Tony Page poet' you'll find some listings. He's a poet of very original ideas; you'll find good reading if you explore those links.


Material shared in 'I Wish I'd Written This' is presented for study and review. Poems, photos and other writings remain the property of the copyright owners, usually their authors. This photo of Tony is by fellow poet Alex Skovron.
Posted by Rosemary Nissen-Wade

Email ThisBlogThis!Share to TwitterShare to FacebookShare to Pinterest
Labels: I Wish I'd Written This, Tony Page