A kite is a fish you have already caught
in a pool where no fish come,
so you play him carefully and long,
and hope he won’t give up,
or the wind die down.

A kite is the last poem you’ve written,
so you give it to the wind,
but you don’t let it go
until someone finds you
something else to do.

A kite is a contract of glory
that must be made with the sun,
so make friends with the field
the river and the wind,
then you pray the whole cold night before,
under the travelling cordless moon,
to make you worthy and lyric and pure. 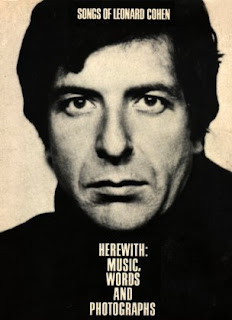 Not all songs are breath-taking poems. I think we'd all agree that Leonard Cohen's are. In fact he was a published poet (and novelist) before he launched his musical career, and that was how I first encountered him.

This poem is the first in his second book, The Spice-Box of Earth, first published in 1961. I still have the copy I was given in the early seventies, a 1968 Bantam edition in its 6th printing. It was perfect-bound badly, and all the pages have been loose a long time, but I still cherish it and keep them in the right order. Around the same time I acquired his novels, The Favourite Game and Beautiful Losers (quite different in flavour from each other, and equally wonderful) and Poems 1956-1968.

They were all given to me by a lovely lover who also sang me lines from Suzanne, and later, when we ended, bits of Hey, That's No Way to Say Goodbye. Cohen is forever associated, for me, with one of the most romantic episodes of my life.

For many people that might be enough reason to love a poem or a song. For poets, we have to love the word-crafting too. It was more a case of loving my lover a little more because he had such an ear for good writing, and gave me gifts I could treasure for their own sake – making them, of course, even better as love-tokens. The affair ended long ago, but my passion for the words of Leonard Cohen never did. And didn't he give us decades of extraordinary words!

Most of them were songs, and all the more beautiful for that. But I wanted to give you something that perhaps not so many of you would already know. I chose it not because it came first in the book, but because it is a little unusual. Many of the poems are love poems, often very beautiful and tender; others are spiritual, or socio-political. These are the great preoccupations of Cohen's work. This piece has a topic of its own, yet one that most of us can relate to (all kids try to fly kites, don't they, or at least watch?). It has the beauty and startlingly original imagery characteristic of his poems, and even a little touch of the bizarre – which is also a characteristic – but here softened.

I'm sure you don't need me to tell you about such a famous artist's life and career, particularly so soon after his death and all the eulogies. If you feel a need to enquire further, you could try the Wikipedia article, and there's also a wealth of material at his official website.

His books are still available at Amazon and don't look like losing their popularity any time soon. The same link takes you to books about him and his work.

In an interview shortly before his death, he joked gently that he had decided to live forever. I believe he very likely will.