Poem of the Week ~ Celebrating Taos with Annell Livingston

This morning, I have one very beautiful poem for you to enjoy, written by Annell Livingston who blogs at AnnellAnnell: Words of a Painter. Annell wrote so beautifully about the spectacular landscape she lives in in Taos, New Mexico, that I thought we might savor this poem, and Annell's thoughts about it, all on its own. Annell is sharing some beautiful photos of the land outside her studio window as well. Let's enjoy. 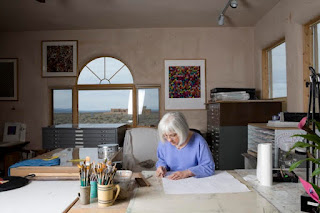 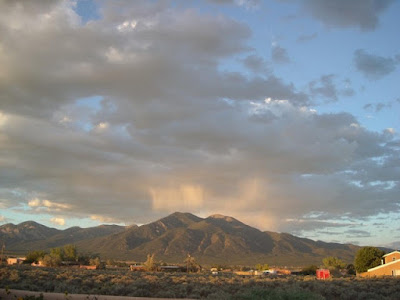 Remember…
Ravens and crows, magpies and such
Birds of prey: eagles and hawks
Soar above like a kite
Eagle eye you can’t escape 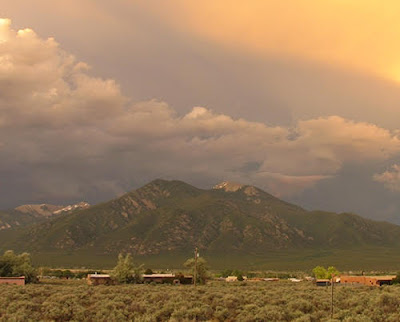 Sherry: This poem is glorious, my friend. The place names sing, these places of your heart. I can feel the heat, the sand, see the old adobe on the mesa. The colour of the light in your photos is spectacular! An artist's delight!

How did this poem come to you, the words that so vividly describe the landscape that you love?

Annell: I drove to Santa Fe, on a Saturday, to pick up paintings from the gallery.  It was a quick trip, down and back.  I was listening to the radio, and there was a person talking who was from Jamaica; he said he was a Rastafarian, and he was explaining about that.  He began to talk about the word, “Remember,” and I was aware of its beauty of sound.  He said this quote, “To remember is to go back to the heart, to make whole.”  I have looked for that, but couldn’t find it, so I am calling it an anonymous quote.  The person speaking on the radio was anonymous, as is often the case, when listening to the radio, you don’t always get in on the beginning, and know who is talking, then you arrive at your destination, and you turn off the car. It is only later you begin to think about what you heard, and realize it was an anonymous conversation. But I thought that I would like to use what he said about, “remember.”

Later, on my way home, again, my mind was blank.  I had no ideas.  I think it was Kerry who told me she liked “list” poems.  So I thought I would make a list poem, something I have never done.

Alone in the car, I could say the words.  Listen, and then write about them.  New Mexico is known for its adobe churches, houses and walls, made from the earth, into bricks of mud, and in the older adobe it must be resurfaced each year, and this is done by hand.

I saw a windmill, spinning in the dusty dry desert wind, and I wanted to say how it sounds.  There is a certain rhythm and often a sound like a clatter, I thought about it being the language of the windmill.

It is a most beautiful drive coming up to Taos, from Santa Fe.  The sky a clear cerulean blue, the clouds were in rectangle shapes, and seemed to be stacked like bricks on the horizon. It reminded me of cotton bales stacked near the tracks or in the gin.  There were other clouds shaped like cotton candy with grey underbellies.  Then I thought of the painting Georgia painted of clouds…and I thought maybe they were waiting for her to return to the studio to paint them. 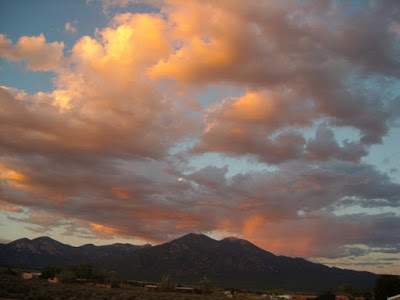 There were birds flying in the air, ravens, crows. (I did not see eagles that day, but have on other trips to Santa Fe.)  But a most beautiful hawk, which seemed to be floating like a kite.

Then I listed to myself the colors I saw.   Earth and sky near the horizon was pink.   So much of what is green is sage green in varying values and shades of sage green.   The mountains indigo.  Much of the earth and houses, sienna. 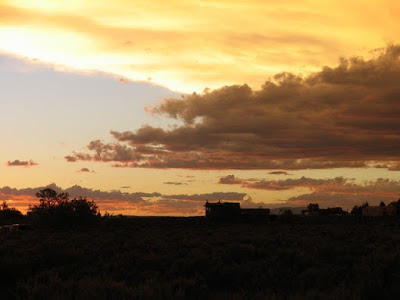 Much of what you see are: mountains, mesas, canyons, The Rio Grand, “Leopard Hills.”  (Leopard Hills are seen near Santa Fe.) Volcanic rock, and  boulders.

I continued with my list, and to say the words aloud, savoring each word.  Mesquite, pinion, tumble weed, cholla cactus, red willow, cotton woods, fruit trees, apples, wild plum.   (To tell the truth, I don’t even know if Mesquite grows in New Mexico, but it does in Texas, and I love that word.)  I hoped the reader of my poem would also like to savor each word.  Saying it out loud.  Allowing the sound to enter him.

Just outside Espanola, I saw a road sign which read Velarde, Embudo, Taos.  As I read the sign, and said the words out loud,  I loved each word, and added them to my list.

When I got home, I began to rearrange the words in my list, and decided it was a poem.  (Kinda like fishing, you never know if it is a fish or not, maybe just caught on a log.)

And that is the story of my poem.

Sherry: How I love the story. I, too, enjoyed savouring the words on my tongue. They are so beautiful, and convey the wonders of the desert to the reader.

Annell, I wonder, having lived on the ocean in your earlier years, how did coming to the desert feel to you when you arrived there? Over the years, how did it become home?

Annell: When my Husband drowned, it seemed necessary for me to seek a new life. My Husband loved to fish, and we had a house at the bay.  I wanted to leave the Gulf coast, so I came to the desert, in the shadow of the mountain.

Everything was different, and I needed what I saw to be different.  A new life; I wanted to leave sorrow behind in the rear view mirror.  It was hard for my friends to see me grieve. I needed somewhere to howl at the moon, and I found my place on the mesa.  No one knew me, no one cared, no one noticed that I howled at night.  So, I was at home on the mesa, under a star filled sky, and moon light night.  I no longer heard the waves lapping at my toes, nor the sea gulls diving and crying.  The desert is a quiet home, the coyotes walked through my yard as if it was theirs, and of course it was.


Because Taos is in the mountains, the weather was cool, and I found I could become a hermit and do my work without interruption.  I was constantly fed by what I saw, sunrises in the morning, and sunsets at night. 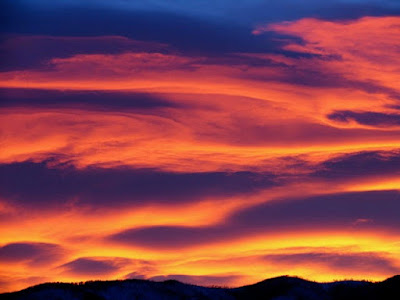 Sherry:  And what spectacular sunsets! Wow! Right out your back door! Thank you for sharing how you came to the desert, Annell. You were so brave, making such a change, but it was the right one for you.

Annell: Millions of years ago, this land was all underwater, and it is like that today. Unless the wind is blowing, it is as if life is trapped in resin.  Nothing moves, and all is quiet on the mesa.  For a long time, painting was all that I could do, and writing…now I am here, and it seems it is where I belong, like the sage brush that holds the sandy dirt to the earth. Without the sage brush, the dirt would all blow away. 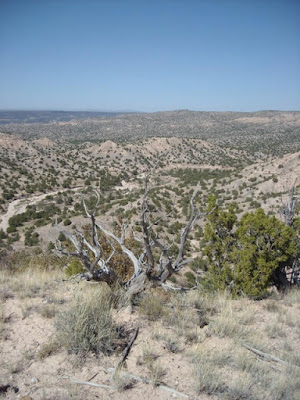 I have tried to be as honest as I can. When I write, it is straight from the heart.

Sherry: And we receive what you have expressed with respect and appreciation, my friend. I have often heard there are similarities between ocean and desert. I can see there must be. In fact, I also see similarities between your desert and the Okanagan, where I grew up and raised my kids. Especially in the above photo.

Thank you so much for sharing your thoughts, your very beautiful poem, and gorgeous photos with us today. What a feast of the senses it has been!

Sigh. Wasn't this a lovely interlude, my friends? We do hope you enjoyed it. Do come back and see who we talk to next. Who knows? It might be you!

Email ThisBlogThis!Share to TwitterShare to FacebookShare to Pinterest
Labels: Annell Livingston, Past Poems of the Week, Taos