It's time to listen to the voices of some of the men in our community, fellow poets, so today we have poems by Hank Kaykuala, who writes at Rainbow, Frank J. Tassone, who blogs at American Haijin, and Cheong Lee San, more familiarly known to us online as dsnake, who writes at Urban  Poems. You're going to love them. Let's dive right in.

EMPTINESS IN THE SKY

Hank: When Chev at Carpe Diem presented a prompt, yuuuagi (an evening lull),  a summer kigo, Hank's thoughts went back to some past events. Hank was leafing through an old tattered photo album some years back and discovered a picture of an old flame. It was just as tattered and long forgotten. It was a brief encounter Hank remembered. It could have developed further, as she was such an adorable little lass. It was stifled when she left without a word.

The above was the background musing in Hank's head when thinking what to write then. 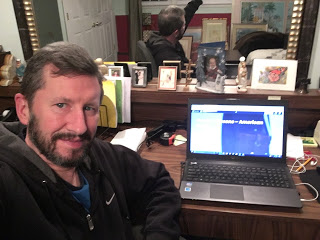 The woosh of passing wind as I move on,
the bam!bam!bam! of hammers fall away.
These wheels that crunch on gravel just beyond,
a highway exit ramp to the blue way,
where life slows down with every town I pass;
and burdens born from crow-caws to day’s rind
yeild to a precious peace I know won’t last,
but let the growls of grief slip from my mind.
Where, then, can I lay my head for the night,
remembering her ever-waking snores,
until the clock’s cukoo at dawn’s first light,
sets me once more on my own tour-du-force?
But where else can my happiness endure
than in your arms like all our days before?

cricket songs
silence from your side
of our bed

Sherry: That silence from the other side of the bed speaks loudly, Frank. Thank you for sharing this very moving poem. I admire the way you introduced so many sounds.

Frank: This sonnet-haibun demonstrates how the writer and reader construct meaning together. I had intended a humorous jaunt, inspired by Shakespeare's "Sonnet 130", in which the narrator undertakes a journey to escape his wife's snoring. A few understood it as such, and Bjorn actually discerned the inspiring sonnet. Many other readers, however, perceived a heartwrenching story of grief.

Looking back on the poem, I can see their point. I was struck by how sorrowful the tone was, and the stark imagery in the haiku clearly did not portray the light-hearted humor I intended! It's as though the poem took on a life of its own and presented the mournful journey of a widower seeking-in-vain to escape his sorrow over his lost love.

From a craft standpoint, I find sonnets a challenge, so I'm delighted that it worked well in conjunction with the haiku. I enjoyed writing it, and I'm happy it was so well received.

Sherry: Wow, Frank, thanks for this explanation. I totally read it as a poem of loss and grief and am smiling to think how we bring our own interpretations to other peoples' poems. I am relieved this is a poem of humour and not heartbreak. Yay! And you executed the sonnet very ably!

The following poem by Lee San will close this feature with a note of hope for the times we live in, when it seems values we believed were steadfast are shaking in  unfriendly winds. 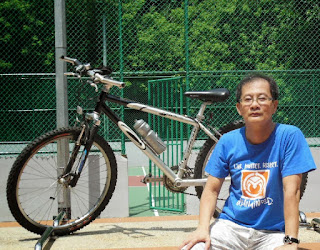 "Can we not raise our hands in anger?beat our swords into ploughshares instead?"and Peace raises her hands and releases the white petrelwhere it circles the storm cloudssays Hopeand the golden flame in her handflickers but still burns strongly in the windsays Loveand the stalk of red rosebends with the wind but does not breaksays Faithand her hands cup the the sunriseweighing the golden orb of the growing sunand they look at the grey skies turning blackthe sea sneering and scattering the dunesand they are not afraid.Sherry: The imagery in this poem is so beautiful, Lee San. I especially agree that these virtues may bend, but do not break.

Lee San: This poem is the response to a picture prompt by Rick Mobbs, a talented painter from New Mexico. Weekly, he would place one of his paintings on his blog for us writers to ponder over it. That was somewhere in 2008.

So around two years later I came around to writing a poem over the painting (you know how tardy I can be). The names Peace, Love, Hope and Faith came to me quite easily and I wrote the poem and promptly forgot about it. At that time I thought it was not that 'complete'.

Recently, I came across it on one of my thumb drives (that's my tardiness at work again). I did some minor edits and decided that it would be a very good and appropriate time to post it. You know, the crazy times we are living in now? So I added in a link to a Pink Floyd song and that's it.  And hope that with these four sisters, the dark tides will turn. :)

Sherry: We need to cling to these values more than ever before.  How we long for the dark tide to turn. Thank you for this note of hope, Lee San.

We hope you enjoyed these poetic offerings, my friends. Do come back and see who we talk to next. Who knows? It might be you!