Wild Fridays: Poems of the Week


No-one can replicate Sherry's wonderful Monday features! We're not even going to try to emulate her fabulous interviews and full schedule. But, as our Friday topics are already varied, we thought we'd sneak in some Poems of the Week here too – not every week but now and again. It's always been such a pleasure to read those features which showcase members of our own community. (Note: 'Poems of the Week' doesn't mean they were written this week, but that they are chosen to be shared this week.)


Two Poems by Audrey Howitt
(aka Divalounger) and a chat. 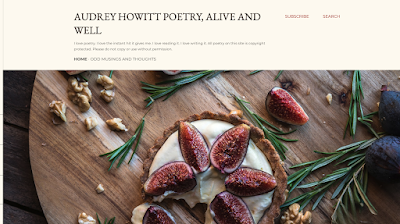 The night coats the rim of the moon with its cloak.
The night pours its lush scent into the secret indentations of the trees,
Into the carnal world of darkened bark.

The night lives in the scent of its admirers,
Those admirers who pour into its blackness,
Who come covered in oils so rich in fragrance
that they ooze the carnality of the trees, of the night, of the moon.

Oh radiant moon, find me this night and cover me in the softness of your down,
That I may scent you in my dreams and sight you in my eyes.

I sing my soul alive each day,
With the grace of the breath of the great light
United and shining within.

Intoxicating, this song.
I am drunk with my life
As it fills and sates me.

Who will sing my soul alive
When my body lies desiccated,
Mere dust upon the crust of the earth?

I hurry not toward death’s door,
For its hinges creak in unseemly harmony,
Discordant to well-tuned ears.

Yet I feel death’s dark breath upon my back
As I hurry away.
The song of light calls.

Audrey, who describes herself as 'Poet, Singer, Voice-teacher, Recovering Attorney, Psycho-therapist, Middle-aged Mama and lover-of-life', has recently renewed her active participation with us after being otherwise occupied a while. But for these lovely pieces I went back to earlier posts at her blog, so hopefully not too many of you have already seen them. There are two because I love them both so much that I couldn't choose! In both poems I find the combination of mysticism and the obvious feeling for nature inspiring and moving.

Rosemary: Would you care to tell us how each of these poems came about?

Audrey: Trees are a favorite subject of mine. I write a lot about them and feel a special pull toward them.  Dreams of Trees is an early piece.  I was just starting to write poetry then. It was a time of intense stress for me in my personal life. We were putting the kids through college, I was back in school and still trying to make enough money to pay the bills.  Dreams of Trees grew out of my feelings of needing to escape, to be cradled again by the trees I spend most of my time with in my yard.

Rosemary: I'm very fond of trees myself and think they are wondrous, sentient, benevolent beings. No wonder you turned to them – and no wonder I liked this poem!

Audrey: I wrote My Soul's Song during my mid-50's--I was feeling my age and starting to focus on what I wanted my back half to look and feel like. (I am optimistic I think--maybe it was my back 1/3rd).  I have always felt a pull toward the light and connectedness that exists between us. For me, this piece was about being in the light as I move toward older age. (I hope this doesn't sound too weird Rosemary.)

Rosemary: Not to me! It is very much what I'm up to as I age, too. Also I do believe that our poetry can be one way of spreading the light to others – when we happen to manifest it in a poem, as you have done with this one.

I notice that some of the comments on your recent posts remark that you are a master of minimalist poetry or micro-poetry. And I agree! You can encapsulate an essence and, in just a few words and some excellent placement of spaces, succeed in conveying both fine nuances and depths of meaning. Yet the two pieces I've chosen, which are earlier, are longer and more detailed. Is brevity something you've arrived at gradually?  And was it a conscious choice from the outset, or something that snuck up on you?

Audrey: I have come to minimalism gradually. and not really intentionally. I have always been drawn to smaller forms, especially the Japanese forms. Japanese poetry is so clear, simple, and elegant. But I am a rule-breaker and so I was not interested in the stringency of the forms.  I started experimenting. I wrote pieces in English and then translated them into Japanese, trying to get the feel of clear, simple images in both languages. The minimalism grew out of that. But I still write in longer forms as well, I am working on a series of pieces right now in longer forms.

Rosemary: You speak and read Japanese???? I'm impressed! How did that come about?

Audrey: I speak Japanese and Russian--I lived in Japan as a young adult and then studied the language, but quit in the face of learning all the Kanji. Russian is the first language I learned. (I am the first child born here of Russian immigrants.) I learned English from watching cartoons.

Every time my younger daughter hears me sing in German, she says that it sounds like a Russian singing in German--

And this answer leads to more questions.

When you say, 'the first child born here of Russian immigrants', where do you mean by 'here'?

Audrey: I am the first child born in the US.

Rosemary: How amazing is that! I thought maybe you meant in your little corner of it.

And where does the German come into it? More and more intriguing, lol.

Audrey: I sing and teach classical singing – opera and art song – so I sing a lot in Italian, French and German.

Rosemary: Ah yes, the 'Divalounger' aspect of you. How lovely it must be to have a gift for music as well as poetry!

I see that, like me, you sometimes play with Satya Robyn's and Kaspalita Thompson's initiatives such as 'small stones' and 'writing your way home' – using writing as a way of mindfulness and, in the case of the small stones, looking outside oneself for inspiration. Has this influenced your development of poetic less-is-more?

Audrey: Small stones fill my notebooks--I am not sure that they are all poems, but they are my way of dealing with life and sometimes poems grow out of them.

Rosemary: Well, small stones don't have to be poems. Most of mine are, because that's what I like to write, but sometimes doing them in prose feels right. I turn to them when I'm blocked. I find it a very useful practice, not only to keep writing alive, but for my own wellbeing too. It's so nice to come across others around the world who are still writing small stones years after being introduced to them.

Many thanks, Audrey, for being so open with us, and allowing me to share your lovely poems.

Hope you enjoyed this post, everybody – and, as Sherry would have said: Next time it might be you!

And now – I'm excited to announce that the wonderful Rommy Driks has joined the staff of Poets United, and in the very near future will start hosting some of the Sunday posts.

Material shared in this post is presented for study and review. Poems, photos, and other writings and images remain the property of the copyright owners, usually the authors. 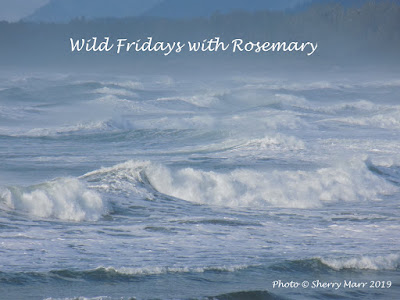