The Discovery of the Pacific

They lean against the cooling car, backs pressed
Upon the dusts of a brown continent,
And watch the sun, now Westward of their West,
Fall to the ocean. Where it led they went.

Kansas to California. Day by day
They travelled emptier of the things they knew.
They improvised new habits on the way,
But lost the occasions, and then lost them too.

One night, no one and nowhere, she had woken
To resin-smell and to the firs' slight sound,
And through their sleeping-bag had felt the broken
Tight-knotted surfaces of the naked ground.

Only his lean quiet body cupping hers
Kept her from it, the extreme chill. By degrees
She fell asleep. Around them in the firs
The wind probed, tiding through forked estuaries.

And now their skin is caked with road, the grime
Merely reflecting sunlight as it fails.
They leave their clothes among the rocks they climb,
Blunt leaves of iceplant nuzzle at their soles.

Now they stand chin-deep in the sway of ocean,
Firm West, two stringy bodies face to face,
And come, together, in the water's motion,
The full caught pause of their embrace. 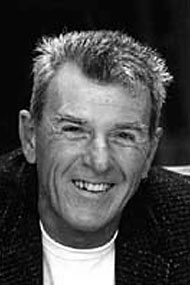 I fell in love with this poem when I first came across it about three decades ago in the book Moly. I fell in love with Gunn's beautiful use of language and the feeling he created with it. Though his life was reputedly turbulent, in his poems he was very good at evoking tranquility. For a few years I bought every new book he produced. They did not disappoint.

I thought of Gunn as an English poet, contemporary with Ted Hughes, as indeed he was — but I have since learned that he moved to America long before I discovered his work, and is known as an Anglo-American poet. He settled in San Francisco, worked as an academic, 'came out' as gay, and experimented with drugs. Described as serious and professional by day, he enjoyed an adventurous night life. Similar contradictions might be seen in his poetry, which moved between metrical and free verse; I just find it all beautiful.

He published many volumes of poetry and some essays, and won a number of awards and prizes. His most famous poetry collection, The Man with Night Sweats (1962) dealt with AIDS. He remained HIV negative himself. At 74, still a party animal, he died from substance abuse. Despite this lifestyle, he had an extraordinarily long relationship — 52 years — with his partner Mike Kitay. His student, poet Steve Silberman, says, 'He represented both the best virtues of civilization and the inscrutable power of staying a wild animal.'

This quote comes from part one of a detailed obituary in the San Francisco Chronicle (Don't forget to read part two as well.) Or you might like this briefer but more literary biography.

He was interviewed in the Paris Review in 1995.

You'll find some of his poems here, and there's an audio clip as well as a CD with Robert Hass.

His books are available on Amazon, but you might have to search individually by title. All the titles are on Wikipedia, at the link on his name at the start of this post.

Email ThisBlogThis!Share to TwitterShare to FacebookShare to Pinterest
Labels: I Wish I'd Written This, Thom Gunn