a man is walking across afternoon sun
drifting across a desert of many voices and things he should not see
the voice of a woman that is camel skin in the wind
the face of a man who is carrying a spoonful of freshwater in a coconut
the touch of a woman like oil from a palm tree
burmese tea cinnamon bark
coral reef hawaiian lava flow
mudbat frogspawn canticle of fear
he is in a rush, his hands are sweating
he is a veteran of war he is a sick dog in a barn
he is a man in a helicopter a man with a flashlight in the dark
he is a photographer of death he is a bloody towel
he is the beard of a goat a chicken bone
the sirocco news the gunclip slung under his naked arm
he is the skin of a lizard he is the broken cheek of a chinadoll
he is armor plate he is tractor shed he is chevrolet
he is a bluebird talk radio egg fallen out of a tree
he is safari hat tooth of lion tail of rat
he is short supply short of supply
a short story by norman mailer
a male stripper named norman rockwell
he is a college president
a collage artist
thinking about nothing
the sun cuts so deep the sun
cuts so deep – this is his tilting sand
this is the sniper's hole, the sunlight snipping
a hole through the magazine of his life 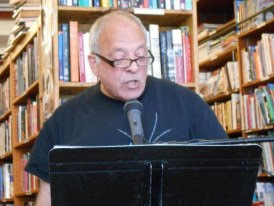 I first encountered NewYork poet and musician George Wallace on MySpace a few years ago. In those days there was quite a community of poets there — not so structured a community as this one, but we found each other and started reading each other's work and commenting ... not so unlike Poets United, at that. (Others I've already included here are Lori Williams, Rob Chrysler, Peter Doyle. The calibre was high!)

His poetry amazed me — such an outpouring of seemingly spontaneous, stream-of-consciousness words. But look again. It is very controlled and crafted. In the poem above, see how he leads us inevitably to the unexpected, quietly shocking conclusion.

Most of us moved away from MySpace when changes were made and it stopped working so well for us. Some of us left our poetry blogs there as archives though, and George was one. I'm not sure if the public can get in, but it's worth a try, at this link. As you will see in the Wikipedia entry which I've linked to his name, he has long been an organiser of poetry events, and you'll come across old promotions for some on his MySpace blog. Scroll down a little way to find the poems.

He edits an online magazine called Poetry Bay (which is archived and distributed worldwide by Stanford University) and another with a regional emphasis, Long Island Quarterly. And then there's Polarity eMagazine, 'an online magazine of New American Bohemian literature'. From 2003 to 2005 he was Suffolk County, Long Island's first poet laureate, and from 2011 to 2012 he was named as Walt Whitman Birthplace Writer in Residence. He is a lecturer at Pace University in Lower Manhattan, and he travels to perform his work in both America and Europe.

George Wallace (AB, MPH, MFA) is an award winning poet and journalist from New York who has performed his work across America and in Europe. Author of Poppin’ Johnny (Three Rooms Press, 2009) and twenty-five chapbooks of poetry ... A former Peace Corps Volunteer, USAF Medical Officer and Community Health Organizer, he is winner of the CW Post Poetry Prize and the Poetry Kit Best Book award. With Oklahoma poet laureate Carol Hamilton he co-founded the Woody Guthrie Poets, and was named a “Next Generation Beat” by the Lowell Celebrates Kerouac festival committee.

You can find his poems online here, here and here — and in other places too, if you Google 'George Wallace poet'. He has published 25 chapbooks of poetry (so far) and a longer volume, Poppin' Johnny, which is reviewed here and can be bought on Amazon. An earlier book, Burn My Heart in Wet Sand (2004) is also available on Amazon. He blogs at George Wallace PoemTrain, where you can buy several of his other titles.

A great supporter of other poets, he hosts them reading their work at poetryvlog.com.

Email ThisBlogThis!Share to TwitterShare to FacebookShare to Pinterest
Labels: George Wallace, I Wish I'd Written This