I've had no man
To guard and shelter me,
Guide and instruct me
From mine infancy.

No lord of earth
To show me day by day
What things a girl should do
And what she should say.

I have gone free
Of manly excellence
And hold their wisdom
More than half pretence.

For since no male
Has ruled me or has fed,
I think my own thoughts
In my woman's head.

Lesbia Harford was an Australian poet, novelist, lawyer and political activist. She was born in 1891, had delicate health all her short life and died in 1927. Nevertheless she packed a lot of living into her 36 years. Of the online biographies, the one I like best is at PoemHunter.com, where you will also find her poems.

She was the eldest of four children and was born with defective heart valves which restricted her mobility and caused her to tire easily, a continual problem that was to amplify with age.
Raised firstly within the middle classes and then with the family bankruptcy and the consequential departure of her father who ran off to the West Australian goldfields, the fact that her mother entered paid work to make sure her children had an education ascribed Harford with a view of society based around both class struggle and feminism.

She seemed a good pick for this week, with International Women's Day coming up, and of course I've chosen this particular poem for the same reason, as it celebrates her freedom to think her own thoughts without male influence — even if that was because her father abandoned the family. She evidently chose to find some benefit in that! 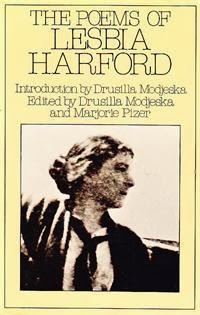 Searching in the anthologies on my shelves, some inherited from my parents, it was surprisingly hard to find a suitably feminist poem from the past. In fact I was confronted with the awful invisibility of women poets in the older anthologies — which led to the belief, still current when I was growing up, that women didn't make 'great' poets (or artists, musicians, novelists...). Well, at least that belief has been thoroughly discredited by now, when women artists and writers can no longer be ignored or their work hidden.

(Where I did find early women poets from non-English cultures, such as Chinese, the translations were by men, which didn't seem quite suitable to use this week.)

By Lesbia Harford's time, some women — a determined minority — were able to make their mark, and later generations of women writers made sure their work was preserved. Harford's poems were published during her lifetime; also the Australian writers Nettie Palmer (1885-1964), Marjorie Pizer (1920-) and Drusilla Modjeska (1946-) were instrumental in publishing posthumous collections. The Palmer collection (the earlier and smaller, with 74 poems) is available for free download. Although I found this picture of the Modjeska/Pizer collection, I can't find a record of it still being in print and available, though I imagine the major Australian libraries would have copies. Let's be thankful for PoemHunter!

She was a brave woman who, despite poor health, fought against injustice and walked her talk. And she was an interesting poet — an original thinker who used direct language in a striking way to tell her truths. She still speaks to us today with great immediacy.