Music is playing as I lay on my back and respond with my body to the
Colors and lights and sounds.
Footsteps, I feel them as much as hear them grow closer,
Even though the new hard plastic things are already shoved in my ear.
Two people, one grandma, one a stranger.
I hear those sounds again as Grandma’s voice rumbles
My name, I know my name in all its versions,
Elizabeth, Lizbeth, L’il Lizzie, Hush Lizzie, Poor baby,
But she says my favorite “Pretty Betty Butterfly”
Only Grandma calls me her “Pretty Betty Butterfly.”
I turn my head trying to catch a glimpse of the other, new voice,
it is soft and full of small sounds. It’s mostly Grandma talking.
“Cortical Blindness”
“Anoxic Brain Injury”
“Difficult delivery, lucky they both lived”
It is grandma’s voice, but those sounds make it sad.
I know the sounds but not what they mean.
I know sad,
I know happy,
I even know mad.
I know Grandma
And mother
And hungry
And full
And light and smells and warmth of arms.
I know I like Elmo, and Daniel the Tiger.
I start to chirp my tracheal Grandma song.
But now there is a new voice.
I am cautious, and close my eyes, pretend sleep.
Because I also know pain.
But there are no bright lights or biting smells
Just the press of the thing against my chest and my belly.
I am uncertain, afraid
But then there are arms holding me and the voice knows how to lean into the parts I can see.
Her hand puts my one hand on Grandma
And moves her other hand by her chin, her mouth.
Then I am sitting propped in her lap,
She takes my hand and touches Kitty,
my other hand touches my face, just below the nose
(I know nose)
and my hand moves sideways in the air,
I think she wants something from me
So I try to raise my own hand to my face.
Over and over we touch things and move our hands.


I like her smile, and her singing
And I want to tell her that
But mostly I want to close my eyes and smell her shirt
And dream. 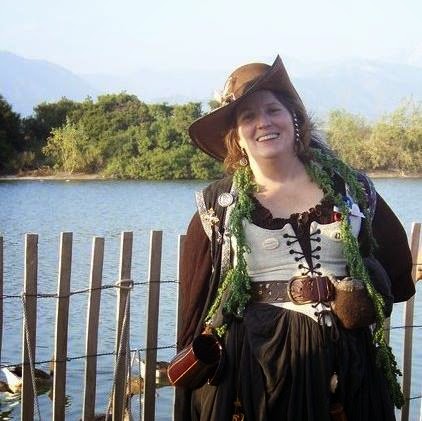 Joanne, an old online friend of mine since MySpace days, is one of several people participating in the 31 Poems in 31 Days challenge emanating from John Hewitt's Poewar site (aka Writers' Resource Centre). We share our efforts in a facebook group.

The prompt she was responding to in this moving piece was to write a persona poem, i.e. writing as if you were someone else. What a brilliant job she did!

The facebook group for this challenge is small and closed, so I know the poem will be new to most of you. Joanne has a blog, crowfae.com, where you can read more of her brilliant poetry and also her prose writings on various topics.

She lives in Phoenix, Arizona. As you might guess from the poem, she works as a nurse.

But she plays as a pirate! (Just in case you're wondering about her costume, pictured.) It's a full-on leisure activity, too important in her life to be called merely a hobby, I think. She and many others dress up and attend "faires" all over the United States — somewhat similar, I suppose, to the popular SF conventions, except that the pirates like to be outdoors. She tells me that the photo I've used was taken at such a faire a few years ago. I love it for her great smile as much as her wonderful outfit.

We used to like reading each other's poems on MySpace. It's good to be able to do so again in the facebook group.

Email ThisBlogThis!Share to TwitterShare to FacebookShare to Pinterest
Labels: I Wish I'd Written This, Joanne Marie de Biasi