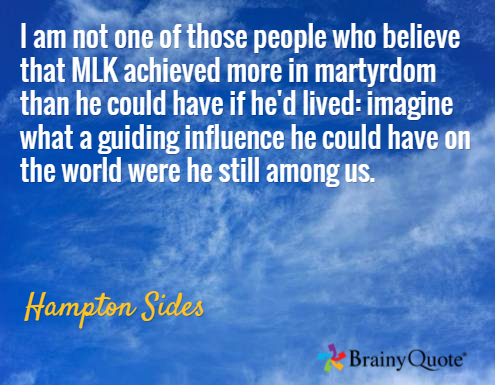 You can't win, Darth. If you strike me down, I shall become
more powerful than you could possibly imagine.
~Obi-Wan Kenobi in A New Hope by George Lucas

"Glory" by Common, John Legend and Che "Rhymefest" Smith.
From the 2014 film Selma.

Here's a very surprising fact! It surprised me, anyway, and led to this prompt.  According to Wikipedia:

In its original meaning, the word martyr, meaning witness, was used in the secular sphere as well as in the New Testament of the Bible.[1] The process of bearing witness was not intended to lead to the death of the witness . . . .


Your Challenge:  Perhaps you have witnessed or experienced witness that needs a poem? Write a new poem for this prompt, letting the tone of the poem reveal your positive or negative feelings about martyrdom and/or witness.

was it so I could
never say
across a courtroom
that man, the one
standing there

was it so you could
imagine a time
when you would be human
again among humans
that you had to leave
some of us
alive?

(Next week, Sumana's Midweek Motif will be A Flower Was Offered to Me. )