There are no stars tonight
But those of memory.
Yet how much room for memory there is
In the loose girdle of soft rain.

There is even room enough
For the letters of my mother’s mother,
Elizabeth,
That have been pressed so long
Into a corner of the roof
That they are brown and soft,
And liable to melt as snow.

Over the greatness of such space
Steps must be gentle.
It is all hung by an invisible white hair.
It trembles as birch limbs webbing the air.

And I ask myself:

“Are your fingers long enough to play
Old keys that are but echoes:
Is the silence strong enough
To carry back the music to its source
And back to you again
As though to her?”

Yet I would lead my grandmother by the hand
Through much of what she would not understand;
And so I stumble. And the rain continues on the roof
With such a sound of gently pitying laughter. 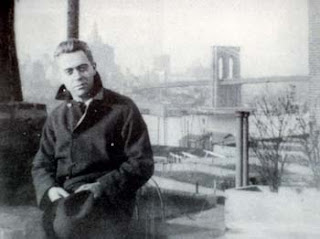 Taking this poem at face value, I find it gentle, nostalgic and lovely. My researches tell me that queer theorists see veiled references to Crane's homosexuality in the closing lines. (He lived at a time when it was not possible to be completely open about it.) This is just one of the poems in which they see such disguised references, and it would probably be surprising were it not so.

I think this poem can be enjoyed with or without that interpretation. The mood is so well conveyed that we don't absolutely need to know what things Grandmother would not have understood. And if we think we do know, that can add extra poignancy.

The photo above shows him with Brooklyn Bridge in the background, the setting of a section of one of his best-known poems,The Bridge – in its entirety a very long poem which, The Poetry Foundation article on Crane says,

he intended, at least in part, as an uplifting alternative to T. S. Eliot's bleak masterwork, The Waste Land. With this long poem, which eventually comprised fifteen sections and sixty pages, Crane sought to provide a panorama of what he called "the American experience." Adopting the Brooklyn Bridge as the poem's sustaining symbol, Crane celebrates, in often hopelessly obscure imagery, various peoples and places—from explorer Christopher Columbus and the legendary Rip Van Winkle to the contemporary New England landscape and the East River tunnel. The bridge, in turn, serves as the structure uniting, and representing, all that is America. In addition, it functions as the embodiment of uniquely American optimism and serves as a source of inspiration and patriotic devotion: "O Sleepless as the river under thee, / Vaulting the sea, the prairies' dreaming sod, / Unto us lowliest sometime sweep, descend / And of the curveship lend a myth to God."

He was known almost as much for his poetic theorising, as expounded in letters to various poet friends. The obscurity he is sometimes charged with arises from his attempts at using 'logical metaphor' in his writing.

He was an alcoholic whose life was cut short by suicide at 32. But he hobnobbed with famous writers and artists, lived some time in France, and is regarded as one of the most influential American poets of his time, even though he left a relatively small body of work. Many consider him a great poet; others think him overrated. You can judge for yourself at PoemHunter, where he is cited by his full name, Harold Hart Crane.

His letters are regarded as important reading too, and can be found among books by and about him at Amazon. A pdf of his poetry in the Classic Poetry Series is available for free download.

The link on his name, above, is to the Wikipedia article. There is also a good summary of his life and work at Academy of American Poets.

Poems and photos posted to 'The Living Dead' for purposes of study and review remain the property of the copyright holders.