He’d turn up with their kids and a glass of
wine. New to the park. Maybe trying to
polish the scene of sprogs in dog shit shoes
chucking doggy-bag water bombs into
something a bit more refined.

One day she turned up with their kids and a
shiner. No trip into a cupboard this.
Too exact a coal black pit. But there was
no trying to hide it behind shades. She
flew it like a pirate flag

over the park, in battered broadside display.
She didn’t say and we didn’t ask
about what was so achingly stamped. She
just invited our silent surmise of
the black elephant.

Who’s sorry now? her bruised skull screamed. She’d screw
a penance from him to make mincemeat of
his puny hook – she’d barbeque his good
name slow, on the spitting rotisserie
of public shame.

I never liked the woman. For all the
usual piss-poor reasons. She was pale
and unsmiling, unreadable, aloof.
Plus her son nearly blinded mine with a
kebab skewer.

The jab missed his eye by an inch.
They were only five, just kids trying to
kill each other in the usual way.
Could happen to anyone. Not her fault.
Though still we suckle blame.

He made the kid make cookies and bring them
to our door as an act of contrition.
I’ll grant him that. It was a nice little
lesson in actions and consequences
and the need for amends

a lesson he himself was now learning again.
I admired her guts, turning up like that,
out of the blue with that shining black. He
wasn’t back in the park for a while, and
then without his glass of wine

swallowed by the badge of her brutal pride.

Domestic violence is seen as a big issue these days, in Australia and other countries. By which I mean it's becoming much less the 'elephant in the room' that no-one talks about, which is what it was for most of our past. It was never a small issue really, but was very much inclined to be swept under the carpet. Women themselves regarded their black eyes and other injuries as cause for shame. I love this story of one woman who didn't try to hide hers behind dark glasses, didn't stay indoors until it had faded, didn't pretend she'd walked into a door. We need to make sure such things don't remain hidden. Both the poet and his subject are doing their bit there! Interesting, though, that the observers in the park still keep silent.

What I also love about this poem is the authenticity, created in the details. These are real people with all their quirks and humanity. We don't of course know if the poem is fictional or whether the events were actually lived and witnessed. It doesn't matter; we've all known such people and such events. They ring so true because they are so familiar. What is not so familiar is the proud behaviour of the woman. I hope she's not fictional! Even if she is – when poems like this get written, we know the time is soon that many such women will come to life. 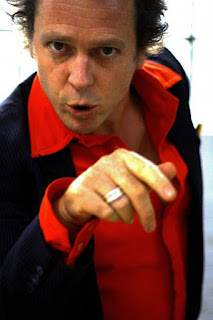 The name Tug Dumbly is a pseudonym, pronounced with the 'b' silent (get it?).

I'll let Tug tell you about Tug, in his bio notes:


Tug Dumbly has performed his poems, songs, monologues and rants for years on radio (Triple J, ABC 702) and at numerous venues and festivals, both nationally in Australia and abroad. He has released a couple of spoken word cd’s through the ABC, and twice won the Banjo Paterson Prize for comic verse, once for his 8000 word epic ode to meat Barbeque Bill and the Roadkill Café.
He has twice won the Nimbin World Performance Poetry Cup, in 2007 and 2010, and in 2010 won the Spirit of Woodford Story Telling Competition at the Woodford Folk Festival in Queensland.

He last year (2015) got runner up in the Josephine Ulrick Poetry Prize through Griffith University for his poem Peeling.

He hates fakeness, but is slowly coming to terms with the fact that fakeness is something many people enjoy. He resents the fact that the world has never recognized his genius, but is learning to forgive it. He performs widely in schools, and his passions include folk music and cicadas. He believes that, given a little perseverance, he would make a fine game-show host, Cult Leader and Shakespearian actor.

He included his contact details, so I will too:

Performers should be seen and heard, not merely read. You can find him on YouTube. Lots of goodies to choose from there.
Much of his stuff is very Australian and others might not get all the references, but I'm sure you'll find something to enjoy. Poets and environmentalists (is there a difference?) will appreciate this one.
He's also described online as a satirist, and that he is, of the kind some people hate, others don't understand, and I adore. I confess to being mad about the totally scurrilous, rude, over-the-top and hilarious Why I Hate Baz Lurhman. Even though I personally don't hate Baz and do love his films, it made me laugh out loud – a lot.

Note:  I at first inadvertently posted an earlier version of the poem. The one you see here now is the one the poet considers final.

Email ThisBlogThis!Share to TwitterShare to FacebookShare to Pinterest
Labels: I Wish I'd Written This, Tug Dumbly