A sadness made me walk along that road
That climbs the hills against the brimming sea,
A welling sadness that I had not named
Until the roadway's bend gave me the sight
Of yellow poplars at its further bend,
So that I came up to them slowly, with my sense
Lost in their fluttering height against the hill,
When my feet were rustling in the brown and yellow leaves.
I do not know how long I stood there, -- across my eyes
The world's tragedy and tears a heavy pain.
I remember it was a yellow leaf I took,
The wind was bringing them slantways down,
As I stood in the roadway's bend, where the brimming sea
Was all the tears and beauty of the world. 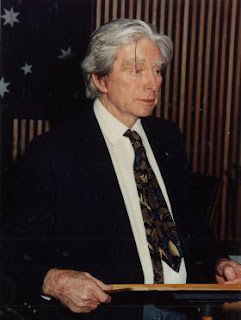 'Roland Robinson OAM,' Wikipedia tells us (see the link on his name, above) 'was an Australian writer and poet.' He was born in Ireland but came to Australia when he was nine.

OAM refers to the Order of Australia, given for 'services to literature, particularly in the preservation of Australian Aboriginal mythology.' He worked closely with the indigenous people of the State of New South Wales to record this material.

He received several other literary awards and honours. Despite little formal education, and a series of manual labouring jobs, mainly in the bush, he became one of Australia's most distinguished lyric poets, and in later life not only worked as a dance critic for The Sydney Morning Herald but studied ballet and appeared in some professional productions. He also did some acting.

He lived much of his adult life at Lake Macquarie, and the most detailed online article about him (though still relatively brief) is included in Lake Maquarie History. I do encourage you to read it, for the fascinating insights into his life and activities. It tells us, among other things:

His love and pursuit of poetry intertwined throughout this amazing array of occupations and his travels with swag throughout the land. Everywhere he went he wrote poetry and was fortunate in meeting and being encouraged by fellow writers like Mary Gilmore. He in turn became a tireless worker encouraging younger poets through activities like writers workshops, and publishing many in a series of books from his own imprint Lyrebird Press.

I chose this particular poem not only because of  its lyric beauty but also because it's autumn in Australia now, my favourite season (although this year it's still very warm so far). Because of the date, and the description of European poplars, I thought he might have been writing of England or perhaps France during the war years – but I can find no mention of his having participated in World War II (aged 36 when it began, I expect he would have been a bit old to be called up) nor of his ever having travelled outside Australia after arriving here. Lots of poplars were planted here by homesick English migrants, but Robinson is better known for his love of the native Australian landscape.

He was known as one of the Jindyworobak poets, whose members sought to create a specifically Australian culture which would owe more to indigenous than European influences.

He was something of an entertainer as he got older. Wikipedia says:


He was a magical storyteller; his booming, lyrical voice, and shock of white flowing hair inspired and excited his audiences. Children sat spellbound by his aboriginal tales and wonderful verses.

His Aboriginal Myths and Legends is still available from Amazon (second-hand). A few of his poems – not in my opinion his best – are available to read at PoemHunter.


Writings and photos posted in The Living Dead for study and review remain the property of the copyright owners.