The moon’s on fire
again, akin to the dance-skip
of her own bright journeyspill.
Do you know her
bubble-lull-shimmer-green-grin, the way she melts
a shadow-sky; leaves us
wanting?
Her spark
starts our
twisted-crimsonrose fire,
held breeze-soft in open
jars for all these
cloudy years.

By the time this is posted, we'll all know the results of the US election – but right now, while I am creating the post, I don't, as polling day has not yet begun. But it is very clear that whatever happens, there are going to be people, not only in America but all over the world, who are disappointed and worried – to put it mildly.

And in Australia and other Commonwealth countries, the day this post appears, 11th November, is Remembrance Day, when we think of those who have fallen in battle. Also, in Australia specifically, it is the day of a political coup about which many of us 'maintained our rage' for decades.

So I thought I would choose something beautiful, to take our minds (if only briefly) off sad and contentious things.

I'm sure De Jackson (aka Whimsygizmo) is well known to many of you, being one of the most active poets in the blogosphere. This is a recent poem, which you may already have seen. If so, I hope you agree it's worth enjoying all over again. 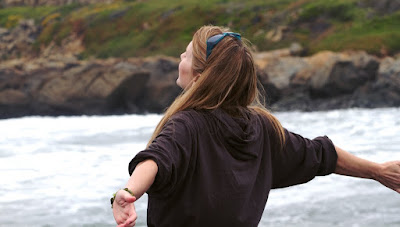 I am always entranced by De's brilliant wordplay and its unexpected, delicious effects. Sometimes it's witty, inventive, startling; here it is simply beautiful – and with some joyous surprises.


De says that she wanted to be a Poet Pirate Princess when she grew up, but is currently cultivating a quiet, content life in Southern Nevada raising two teens, penning ad copy, and scribbling poems in the margins of life.

I assert that she has certainly achieved the first goal. Scribbling 'in the margins' is OK, so long as there is scribbling! It's usual for poets to support themselves by doing other work. Poetry itself, as we know, is unfortunately not a lucrative occupation.

Motherhood is pretty important too – and after all, we do need some life to put into our art. I would go so far as to say that life stimulates art.

I think many excellent poets are to be found online only, these days. But if publication in literary journals and the winning of awards are measures of poetic ability, De is doing all right in those ways too.

Her words have made their way onto the pages of such journals as Curio, Garbanzo, Burning Word, Bolts of Silk, Miller’s Pond, Moon Hollow Press, Shot Glass Journal, Tuck and others. She is a regular contributor for Phoenix Soul, was honored as a Poet Laureate for Writers Digest Poetic Asides in 2012, and she won the Poetic Asides 2015 November Chapbook Challenge.

She says she has been paid for her poems in 'journal copies, garbanzo beans, and one time, a whole dollar'. Ah well, at least the principle of energy exchange is being honoured. (And very few literary journals make a fortune either.)

De writes something just about daily at her 'Whimsygizmo' blog.

Because her lovely poem above is short, I'll treat you to another (also recent) in farewell:

The way the sky cracks
open
to allow
the rising of the moon.
The way your lips part
just before
we bid the day adieu.


PS I completed this post before the sad death of Leonard Cohen, but it's a sweet, if poignant, coincidence that De's second poem above is called 'Partings' and opens with lines reminiscent of Cohen's 'There is a crack in everything, that's where the light gets in.'

Email ThisBlogThis!Share to TwitterShare to FacebookShare to Pinterest
Labels: De Jackson, I Wish I'd Written This