A Chat With Robin About Humans, Whales, and the Great Barrier Reef

Some weeks ago now, Robin Kimber, whom we know affectionately as Old Egg, who writes so charmingly at Robin's Nest, wrote a poem reflecting on how the world has changed since we were young. I think many of us feel the same way, looking back on simpler times, when there was a certain societal expectation of behavioral norms, that seems to be lacking today. I asked him if he might reflect a bit on his poem, and his feelings writing it. I bring it to you today, for your thoughtful consideration.

SAND THROUGH MY FINGERS

Little did I think playing on the beach
A child many years before
Those sand castles, moats and dams that I built
Were mountains in days of yore

Did they stay close or forsake Mother Sea?
To find a safe place to hide
Live in a cave or construct a wood hut
Safe from predators abide

Sherry: It does seem a very different world today from the one we knew as children. I often wonder if today's children feel about life the way we did, when life was safe and stable and calm. I do hope they have the same pleasures and hopefulness and dreams that we did.


Robin: When I wrote my ‘Looking back’ poem a few weeks ago, I was getting frustrated with the Australian government for supporting international mineral magnates to come and drill for oil in off South Australia’s shores, and mine for coal in Queensland, which had the likelihood of affecting not only the unique fauna in the neighborhood but would also seriously endanger the ocean's inhabitants and the unique Great Barrier Reef of the coast of the state of Queensland.

The Reef is already suffering due to global warming, causing it to bleach, but the proposal was to provide a deep shipping channel to the ports so the coal could be easily transported abroad. 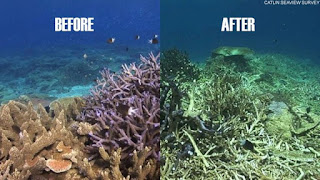 
Australia doesn’t really need it, with the feasibility of all our energy being sourced through renewable means, such as Wind and Solar generation in the near future.

Sherry: I have been concerned for the Reef, too, Robin. They must be protected, and helped back to health.  I am also inspired by your country's efforts to switch to clean energy.

Robin: Oil may also be found in the Great Australian Bight, which is the massive bay that stretches hundreds of miles from Western Australia to South Australia. It is a sanctuary for Southern Right Whales to come in wintertime to escape the frozen Antarctica, and for females to give birth in safety. 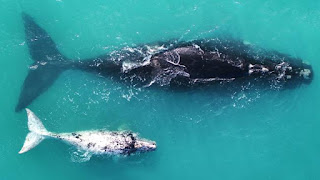 Because there are very few sites for harbours for hundreds of kilometres, it is a safe haven for other sea life too. Strict fishing limits are imposed on both commercial and recreational fishermen there to ensure the fish stock numbers are kept viable. Clearly having a huge exploration effort for oil in the Bight would affect not only the wildlife but Australians as well, together with the tourist industry that this unique environment attracts.

Sherry: It is the same struggle everywhere, addressing the need to protect wild ecosystems, against the voracious demands of the multinationals, whose bottom line is always money, at the expense of all else.

Robin: In the poem I wrote, I tried to convey how the innocence of mankind has been lost over the millennia. We have developed the ability to do almost anything on Earth and beyond with the aid of education, cooperation, scientific discoveries and our inventiveness, but we still cannot feed the starving, we cannot preserve the precious forests that give us air to breathe, we pollute the atmosphere and cause an acceleration of global warming and still fight each other like savages, as we don’t want to share or we dislike the way that others worship their gods, thinking that we are the only ones that are right.

Sherry: I feel the same way, Robin. I resonate very much with your poem "What's Happening?" and would like to include it here, since it continues this lamentation.

What's happening to our world?
As we now cringe in mortal fear
Are terrified of rulers vain
That will destroy all we hold dear

Sherry: I do, too, my friend. I have always been determined that the transformation of human consciousness would occur in time, that humans could not possibly be so short-sighted as to put money before planetary survival. With the election of the U.S. president, I admit to falling into utter discouragement. The planet doesn't have four more years to ignore climate change.

But I am noticing his withdrawal from the Paris Climate Accord has galvanized and strengthened most people and countries of the world, including cities and states in the U.S.,  to work all the harder to make the switch to clean energy. So, in a way, his approach has backfired quite nicely.

Robin: This Earth we live on will continue with or without us changing slowly or dramatically, if we are foolish. But mankind sees only money in the bank, not trees in blossom, see castles of their making rather than the health of all living things. We think we are so big and important but we can’t see we are upsetting the balance of nature and are hastening a disaster that may well be catastrophic.

Sherry: It is astonishing to me, when we have all the information, see the poles melting,  coastal areas already flooding, that we are still so slow to act. We are the only species so greedy and heedless that we destroy our own habitat (and that of every other living thing). 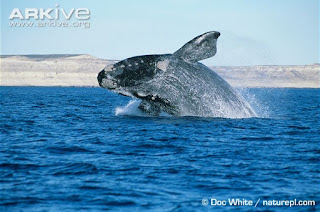 Robin: Southern Right Whales as well as seals and sea-lions can often be seen all along South Australia’s and other states coastlines. Now that it is winter, we can expect a whale sighting any day now at Victor Harbor, a former whaling port where they like to come for a rest.

Sherry: Our whales on the west coast of the island are here too, migrating up to Alaska from Baja. Some of them will stay all season in our area, becoming accustomed to the tour boats. Each year, there is a "friendly," who sometimes approaches a boat and allows itself to be seen close up, looking in at the people with its big, ancient eye. More rarely, one allows itself to be patted, a gift and an amazement. I always think that "whoosh" they make sounds like the voice of God. Their breath is very ancient too. It smells of ocean bottoms and things long gone.

Robin: Curiously there’s a rule here that you shouldn’t approach too close to a whale when they are in-shore just in case they suddenly notice you and make a sudden movement causing your boat to capsize!

Sherry: We have that rule too. Boats must stay a good distance away and may not chase or pursue whales. We do not want to disturb them. When we spot them, we stop the boat, turn off the motor and drift. I find that whales approach the rubber zodiacs more often as, in them, we are drifting silently, at almost the same level. I remember one diving right beside my boat once. It thrilled me to my toes! 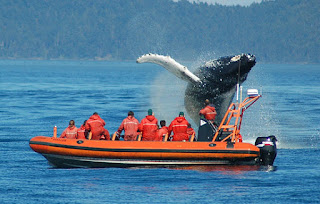 Robin: My wife and I looked over a cliff on the Bight (between South Australia and Western Australia) and there must have been over twenty whales placidly making themselves at home and there were young ones there too. 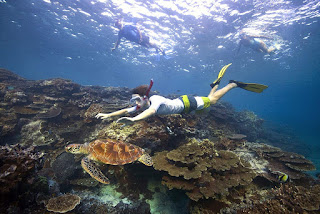 
In the Barrier Reef's tranquil waters, people swim miles from shore, (which I have done!), but I didn’t stay in too long. I didn’t want a shark to sniff me out!

Sherry: It must have been amazing! Robin, I have enjoyed this interesting chat so much! Thank you for sharing your knowledge and reflections with us. You have given us much to think about.

Well, my friends, there you have it: humans, whales, the great barrier reef, climate change and clean energy, a conversation  for our times. Do come back and see who we talk to next. Who knows? It may be you!