Tonight I Can Write (The Saddest Lines)

Tonight I can write the saddest lines.

Write, for example, 'The night is starry and the stars are blue and shiver in the distance.'

The night wind revolves in the sky and sings.

Tonight I can write the saddest lines.
I loved her, and sometimes she loved me too.

Through nights like this one I held her in my arms.
I kissed her again and again under the endless sky.

She loved me, sometimes I loved her too.
How could one not have loved her great still eyes.

Tonight I can write the saddest lines.
To think that I do not have her. To feel that I have lost her.

To hear the immense night, still more immense without her.
And the verse falls to the soul like dew to the pasture.

What does it matter that my love could not keep her.
The night is starry and she is not with me.

My sight tries to find her as though to bring her closer.
My heart looks for her, and she is not with me.

The same night whitening the same trees.
We, of that time, are no longer the same.

I no longer love her, that's certain, but how I loved her.
My voice tried to find the wind to touch her hearing.

Another's. She will be another's. As she was before my kisses.
Her voice, her bright body. Her infinite eyes.

I no longer love her, that's certain, but maybe I love her.
Love is so short, forgetting is so long.

Because through nights like this one I held her in my arms
my soul is not satisfied that it has lost her.

Though this be the last pain that she makes me suffer
and these the last verses that I write for her. 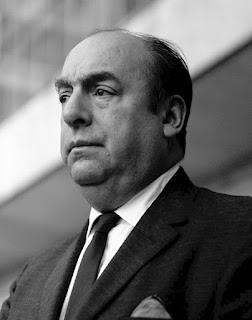 I've been having a bit of a Neruda-fest lately. First my son, who always knows just what I will like for presents, gave me a Kindle edition of Neruda: An Intimate Biography by Volodia Teitelboim. I'm still reading it, and it's absorbing. It's not a recent volume, but my son saw an online discussion about it and thought it would be something I'd like.

Then he added, 'I'd not heard of him but ... he sounded pretty interesting.' I was shocked. Neruda is one of my poetry gods! I told my son that his mother had obviously neglected his literary education. (But of course this gets him even more points for realising I'd want the book.)

Almost immediately, the local cinema showed the movie Neruda. I knew nothing about it, and went to see it for the name alone. To say it did not disappoint would be a massive understatement. I was stunned and rapturous at once. It's very biographical, about one particular period of his life, but also has a fictional element (which is declared) that makes it even more fascinating. I know that sounds peculiar, but – no spoilers.

I don't have superlatives enough to tell you how beautiful it is. The wonderful photography is part of it, but only one aspect. Oh, just see it! As I said on facebook, I give it 500 stars.

The poem I've chosen was featured repeatedly in the movie – that is, the opening lines were featured repeatedly, then the action moved on. Apparently it was one of his most famous and best-loved poems while he was alive. A Chilean who lived during interesting political times which included oppression and revolution, he was considered very much the voice of the people and was hugely popular. He first became known as a poet at the age of 10, and went on to win the Nobel Prize for Literature in 1971.

He was born Ricardo Eliécer Neftalí Reyes Basoalto. Pablo Neruda was his pen-name but he made it so famous that it became, to all intents and purposes, his real name; in fact he eventually made it his legal name.

He wrote in a variety of styles, including surrealist poems, historical epics, overtly political manifestos, a prose autobiography, and passionate love poems....

The Colombian novelist Gabriel García Márquez once called Neruda "the greatest poet of the 20th century in any language." Harold Bloom included Neruda as one of the 26 writers central to the Western tradition in his book The Western Canon.

On July 15, 1945, at Pacaembu Stadium in São Paulo, Brazil, Neruda read to 100,000 people in honor of the Communist revolutionary leader Luís Carlos Prestes.

Neruda was a fervent Communist at a time when this was often a form of idealism. Later in life he expressed disillusionment at the totalitarianism of both Russia under Stalin and China under Mao, but remained a passionate advocate of the people.


During his life he held both political office and several diplomatic posts. When Communism was outlawed in Chile he avoided arrest by going into hiding and escaping into Argentina. Later he was a supporter of President Allende, and it is strongly suspected that he was poisoned by Pinochet (although it has not yet been proven, and he was hospitalised with prostate cancer at the time).

The Wikipedia article is detailed and informative. If you Google his name you'll find a number of others, some of which discuss his life and career in even more depth.

You can also find a good selection of his poems online, not only at Poem Hunter but various other sites. Again, please Google. They're worth finding!

I featured him here once before, in I Wish I'd Written This, and he has often been quoted in Midweek Motif.

Books by him and about him are available at Amazon.


Material shared in 'The Living Dead' is presented for study and review. Poems, photos and other writings and images remain the property of the copyright owners, where applicable (older poems may be out of copyright). The photo of Neruda used here is in the public domain.