The Language of Birds
After Galway Kinnell 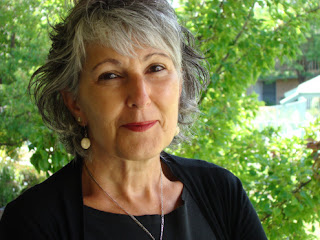 A fervent bird-lover myself, this poem really speaks to me, especially the lines about birds’ warblings perhaps being the first grief songs ever sung. By my age, one accumulates a significant weight of the “sadness that lives inside all one is.”

Eve Joseph is a Canadian poet who grew up in North Vancouver, B.C., and who worked on freight trains and travelled widely in her youth. She and her family now reside in Victoria, on Vancouver Island.

Ms. Joseph is a hospice worker, drawing from her experiences to write her non-fiction book on death and dying: In the Slender Margin: The Intimate Strangeness of Dying (2014), which won the Hubert Evans nonfiction award.  Her nonfiction has been short-listed for CBC Literary Awards, and was named the Globe Books 100: Best Canadian non-fiction 2014.

Her new book of poems, Quarrels, is coming out in May of this year. I can’t wait! Information on all Ms. Joseph's books can be found here. 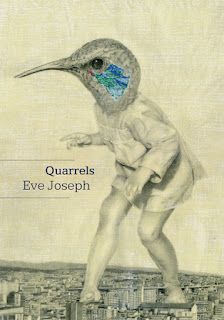 When I contacted Eve to tell her we were featuring her work, she offered us a sneak peek at a prose poem from Quarrels, and I jumped at the chance to share it. Let's take a look:

MY GRANDFATHER LAY MOTIONLESS BENEATH A CHENILLE BEDSPREAD.
His upturned hands drifting like little boats. He was coming and going through the open window, a little further each time. Chestnuts, spiked like medieval maces, lay on the ground in what looked to be the aftermath of a long and arduous battle. Death is inside the bones, wrote Neruda, like a barking where there are no dogs. I kept my distance. Behind me, my father was on his knees by the hospital bed. I couldn’t tell if he was praying. On the wall, his shadow leaned slightly forward. As if wanting to comfort but hesitating to intrude.


Eve says her stroke in 2013 “changed my view of myself.” She wrote a wonderful essay about it in the Globe and Mail, which you may find of interest. Her website is here.

Let’s look at one more poem from The Startled Heart:

A starling with no feet
eats at my table: a few crumbs, dried cranberries.

Where does it get me,
my foolish pity?

Intentional or not, you stepped
in death's way.

A bone-white edge, the near perfect
fit of broken things.

Too late for lessons now. A blackbird spoke
because you asked.

It's hope that does me in: the place
the voice breaks.

What's left? A kind of grace:
a perilous landing.

As we can see, this poet knows much about death and dying, which is also to know a great deal about life and living. We hope you enjoyed these offerings.