from The Morning Patio


A jet roars overhead en route to Heathrow. The rattling call of a magpie. An American gray squirrel lopes along the top of the back wall.

20 May
A wren sings in the garden of our Iranian neighbor, whose wisteria infiltrates the elder tree so that it blooms two different ways at once.

24 May
A brick lies in the dirt at the back of the garden, dislodged by the running of cats and foxes along the night-time labyrinth of walls.

7 June
Women's voices carry from a nearby garden. The resident terrier runs semi-circles around the elder tree, wheezing up at its flowering limbs.

8 June
The great, cream-colored roses glow in the sun, even those beginning to turn brown. Three carrion crows—their nasal cries.

26 June
Hoverfly in the garden defending a cubic foot of air; someone practicing guitar in another garden—the lives I see versus lives I understand.

28 June
The elder sheds a gray feather. How can such a small tree harbor so many secrets? From a neighborhood dog, the uncanny howl of a wolf.

6 July
A tiny spider sits in a web linking mock orange to clothesline, which runs through the elder tree—she must feel each vibration in the yard.

12 July
The labored wingbeats of a wood pigeon spooked by my turning of a page, two cabbage white butterflies swirling in its wake.

15 July
The sun shines in my eyes through an eye-shaped opening in the mock orange. I tilt my head and watch the London dust drift through the beam. 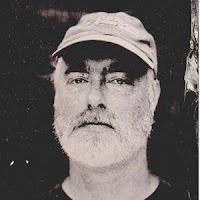 In 140 or fewer characters, every morning Dave Bonta writes what I call a prose poem and he calls "the world's least ambitious daily newspaper" – first as a twitter post and then as a blog entry – from his front porch in Plummers Hollow, Pennsylvania, a private nature reserve. Except that lately he has been on an extended visit to London, writing instead from the back patio of the house where he's staying, so the name of his blog has become The Morning Porch/Patio.

I receive the blog entries daily by email, and it's always a treat to share Dave's morning. I shared some of his front porch observations with Poets United in February 2015, so this time I am selecting from the patio posts – a very different environment no doubt, yet one he seems to find equally enthralling. He makes it fascinating and delightful for me too. I hope you agree!

He says he always sits outside with his coffee right after his morning shower, but doesn't always write the post for another hour or two. I guess that gives him plenty of time to just pay attention to whatever is going on, and absorb it.

He generously says at his blog:


All content by Dave Bonta at The Morning Porch is licenced for reuse and creative remix under a Creative Commons Attribution-Share Alike U.S. 3.0 license. This means that you can take what you like and use it as you wish, as long as I am credited as the author, a link back is provided (if online), and the resulting work is licensed under the same or similar license. Contact me for permission to reproduce Morning Porch posts in works with more traditional, restrictive copyrights.

So I hasten to declare that this "I Wish I'd Written This" post is licensed the same way.

You may be interested to know about his book, ICE MOUNTAIN, where he is described in the blurb as "poet and naturalist".

It's available from both Amazon US and Amazon UK, and is an illustrated lament for the effects of climate change on the area where he lives. More details here.