It's Spring Equinox here in the Southern Hemisphere, and I was looking for a poem to read tomorrow at a celebration of this event. Many of the ones I found were clearly written about the Northern Hemisphere; you can tell by the kinds of trees mentioned, for instance. And/or I thought them unsuitable because they were couched in very old-fashioned (to us) language. But I liked these.

The fields are snowbound no longer;
There are little blue lakes and flags of tenderest green.
The snow has been caught up into the sky--
So many white clouds--and the blue of the sky is cold.
Now the sun walks in the forest,
He touches the boughs and stems with his golden fingers;
They shiver, and wake from slumber.
Over the barren branches he shakes his yellow curls.
Yet is the forest full of the sound of tears....
A wind dances over the fields.
Shrill and clear the sound of her waking laughter,
Yet the little blue lakes tremble
And the flags of tenderest green bend and quiver. 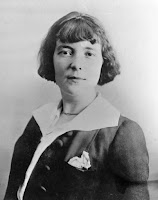 Katherine Mansfield (1888-1923), better known for her short stories, was a New Zealander but for most of her adult life preferred to live in London. Sadly, her life was ended by tuberculosis at the age of 34.

Last night beneath the mockery of the moon
I heard the sudden startled whisperings
Of wakened birds settling their restless wings;
The North-east brought his word of gladness, "Soon!"
And all the night with wonder was a-swoon.
A soul had breathed into long-dreaming things;
Some unseen hand hovered above the strings:
Some cosmic chord had set the earth in tune.
And when I rose I saw the Bay arrayed
In her grey robe against the coming heat.
A pulse awoke within the stirring street–
The wattle-gold upon the pavements thrown,
And through the quiet of the colonnade
The smoky perfume of boronia blown.

Arthur Adams (1872-1936) was another New Zealander, whose career in journalism also took him to Australia, China and London. He was a playwright and novelist as well, and for a time private secretary and literary adviser to the Sydney theatre manager, J.C. Williamson. Later he was for some years editor of 'The Red Page' (literary gossip and opinions) of the famous Sydney journal, The Bulletin.

Spring Night In Lo-Yang Hearing A Flute
by Li Po

In what house, the jade flute that sends these dark notes drifting,
scattering on the spring wind that fills Lo-yang?
Tonight if we should hear the willow-breaking song,
who could help but long for the gardens of home?

Li Po (701-762) was a Chinese poet of the Tang dynasty (also known as Li Bai, Li Pai, Li T'ai-po and Li T'ai-pai). Wikipedia tells us that he was 'acclaimed from his own day to the present as a genius and a romantic figure who took traditional poetic forms to new heights'.

He was in the Northern Hemisphere of course, and this sweetly homesick poem is only tenuously about Spring, but it appealed to me anyway. Willows are not indigenous to Australia but they do grow here. In fact there were two in our back yard when I was a child; perhaps that's why I like the poem so much.

Although many of you are now in Autumn (my favourite season) I hope you'll all enjoy this little touch of Spring.

(And which poem will I choose to read at the Equinox? Possibly none of the above. I'm still looking. But if it's one of these it will probably be the Adams, despite some rather olden-day constructions. It has the most Australian flavour. And it fits the theme of the event, which is 'New Beginnings'. The Mansfield is sweet, but although we do have snow in Australia, not in this part of it.)

Material shared in 'The Living Dead' is presented for study and review. Poems, photos and other writings and images remain the property of the copyright owners, where applicable. (older poems may be out of copyright)