The green elm with the one great bough of gold
Lets leaves into the grass slip, one by one, --
The short hill grass, the mushrooms small milk-white,
Harebell and scabious and tormentil,
That blackberry and gorse, in dew and sun,
Bow down to; and the wind travels too light
To shake the fallen birch leaves from the fern;
The gossamers wander at their own will.
At heavier steps than birds' the squirrels scold.

The rich scene has grown fresh again and new
As Spring and to the touch is not more cool
Than it is warm to the gaze; and now I might
As happy be as earth is beautiful,
Were I some other or with earth could turn
In alternation of violet and rose,
Harebell and snowdrop, at their season due,
And gorse that has no time not to be gay.
But if this be not happiness, -- who knows?
Some day I shall think this a happy day,
And this mood by the name of melancholy
Shall no more blackened and obscured be.

An October poem, as October begins! After the Spring poems a couple of weeks ago, I thought I'd better acknowledge the Northern Hemisphere and give you some Autumn poetry. In this case, of course, the proliferation of references to Northern Hemisphere flora and fauna was not a problem!

The problem was that many of the possible choices were so famous that you'd probably already be familiar with them – Keats's 'Ode to Autumn' and Shelley's 'Ode to the West Wind', for instance. Beautiful indeed, but no longer surprising. 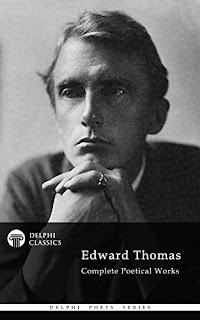 Edward Thomas (also English, though of Welsh descent) is not quite so well-known any more – though greatly esteemed and popular in his heyday, and still respected. And, of the  lesser-known autumn poems I found, this one particularly delighted me with its lyricism and rich detail.

Thomas came late to poetry, after having been a successful essayist, novelist and literary critic. He was a great friend of Robert Frost, who lived in England for a time, and Frost encouraged him to write poetry.

Wikipedia relates the sad story that they used to go walking together, and Frost's famous 'The Road Not Taken' was meant as a gentle dig at his friend for being indecisive about which route to take – but Thomas took it much more seriously. What makes this a sad story is that Thomas had been undecided about enlisting to fight in World War I and the poem decided him. As 'a mature married man', we are told, he could have avoided it, but he joined up in July 1915 and was killed in action in France in April 1917.

He is therefore usually included among the British  'war poets' of World War I, but in fact most of his poems deal with other subjects.

An article at Poetry Foundation tells us that the likes of Walter de la Mare, Aldous Huxley and Seamus Heaney considered him one of the most important English poets. He was credited with 'introducing a modern sensibility' to twentieth century poetry, 'later found in the work of W.H. Auden and Ted Hughes'.

You can find more of his poetry at Poem Hunter; and his Amazon page contains a range of volumes of his poetry and prose as well as several biographies of which he is the subject. (I couldn't resist buying the Kindle edition pictured above. It's not only comprehensive but incredibly cheap!)