Remarked, unsung,
oxygen, in the swamp of images.

Gaze on these words, reckon
how deep you can go into my dream.

Immerse in my clear stream,
nourish the meadows of your attention.

Listen to my water song
and drink deeply.

Escape in me to other worlds, where I whisper

silk across your skin, drip plum juice off your chin.

If you are uncomfortable here,
let me walk with you, I will be your guide.

The way to read a poem is often.
Walk with me often to the end

where I will leave you,
your heart full, my burden eased. 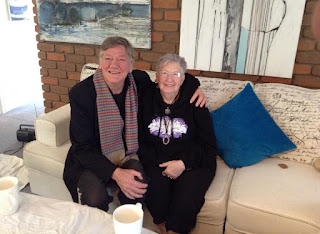 Ken's an old mate of mine from when we were both performance poets in Melbourne. I featured him here once before, in 2011 (click here) where I detailed our early connections. We caught up after a very long time when I visited Melbourne a few years ago.

Now I've just finished proof-reading his forthcoming 'new and selected', titled Who Among Us? ('The Poem' is one of the 'selected'.)The blurb says:

Ken Smeaton was born in Ballarat, educated in Canberra and lived and worked in Melbourne from 1970 to 2017. He is known throughout Australia by his poetry organising and his commitment to live readings and performance. Retired, he is living in Newstead, country Victoria.

Speaking of live readings, he's all over YouTube with his RealPoetry movies recording performances by other poets and himself, if you'd like to have a listen. (He continued being a performance poet in Melbourne long after I had moved elsewhere.)

It's just been Valentine's Day, and the above poem (originally from a book called Love Poet Live) reads almost like a love poem from a poet – or poem! – to readers.

I published one of his books, Real Face, long ago when I was an independent publisher of Australian poetry. Among the pieces he has selected from that for the new book are these three actual love poems, as romantic as anyone could wish, which I'll share with you too for Valentine's Day:

Her fingertip
touched on my skin.
A surface-skipped pebble
woke an ocean within.

You don’t talk unnecessarily.
You are as quiet
as if you live
in a faraway garden.

I’m sure you do.
I gaze into your eyes
for long periods
to join you there.

After dark
in the caravan park
a thief creeps
to the only garden.
Secateurs and glove
a snip for love
and on his darling’s breast
a rose.

Note: I suppose I should mention, for Americans, that a caravan is what (I think) you would call an RV or camper trailer.

Material shared in 'I Wish I'd Written This' is presented for study and review. Poems, photos, and other writings remain the property of the copyright owners, usually their authors. In this case, Ken Smeaton holds the copyright in the poems: The Poem © Ken Smeaton 2001; Suddenly, Live a Dream, and A Rose © Ken Smeaton 1987.

Email ThisBlogThis!Share to TwitterShare to FacebookShare to Pinterest
Labels: I Wish I'd Written This, Ken Smeaton