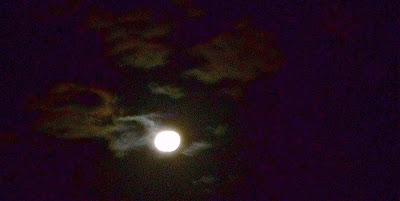 A friend I lunched with yesterday was very excited. He had been to buy some art supplies, and while there had spotted this quote displayed:

“Nobody tells this to people who are beginners, I wish someone told me. All of us who do creative work, we get into it because we have good taste. But there is this gap. For the first couple years you make stuff, it’s just not that good. It’s trying to be good, it has potential, but it’s not. But your taste, the thing that got you into the game, is still killer. And your taste is why your work disappoints you. A lot of people never get past this phase, they quit. Most people I know who do interesting, creative work went through years of this. We know our work doesn’t have this special thing that we want it to have. We all go through this. And if you are just starting out or you are still in this phase, you gotta know its normal and the most important thing you can do is do a lot of work. Put yourself on a deadline so that every week you will finish one story. It is only by going through a volume of work that you will close that gap, and your work will be as good as your ambitions. And I took longer to figure out how to do this than anyone I’ve ever met. It’s gonna take awhile. It’s normal to take awhile. You’ve just gotta fight your way through.”
― Ira Glass

Actually it was displayed like this. (I went to find it for myself and took a snap.) Quite witty, huh, to reproduce it on glass, considering the author's name? But not easy to read in a photo, so I thought you'd better have the text above too. 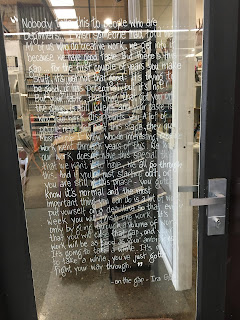 If you live in America you probably know a lot more than I did about Ira Glass. His Wikipedia entry has just told me that he is a public radio personality and TV presenter, plus a lot of other information which stamps him as a busy and productive man.

But it is the quote itself which I wanted to draw to your attention – even if you have seen it before, as you may well have done; it was easy to find online.

Is it true for you? Did you go through the kind of phase described? The kinds of reactions? I certainly did, more than once; the most recent occasion only a few weeks ago. It is something which can happen to the experienced, not only those just beginning. I like to think it heralds a new quantum leap in my poetic development each time.

Because that's the other thing that happens. Improvement can occur gradually, and often does – but sometimes it appears to be sudden, apparently out of nowhere. It happens on an unconscious level first, with no appearance of anything at all happening. When it appears on the page, everyone is taken unawares, including the poet. Glass is writing about all kinds of art, but poetry is definitely one example. The same applies to these other quotes I snapped at the same time: 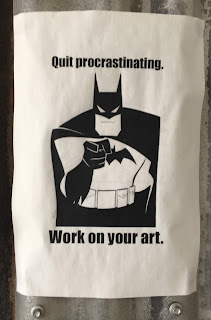 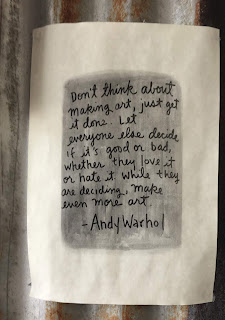 I do like Warhol's advice! However it could be taken to mean that we need never revise our work, which I think would be a mistake. I'd rather see revision as part of the 'making', the 'getting it done'.

Batman's stern admonition, straight to the point is more of the same. The overall message in all these is, 'Don't give up!'

Is there also a suggestion that we should refrain from judging our own art? Warhol seems to be saying so.

It's very hard to tell how good or otherwise our own work is, I think. We tend to rate it low – so much so that my only absolute rule in poetry workshops is to forbid people prefacing a sharing of their writing with self-disparaging remarks – 'This isn't very good' and the many variations on that theme.

At the very least I think it's unwise to pass judgment on our writing immediately. It's very hard to be objective until some time has elapsed. If I complete a new poem to my own satisfaction, I'm inclined to think it's brilliant. Two days later I'm more likely to view it as a pathetic failure. It's better to set it aside for a few weeks or months. Meanwhile, one might as well follow Warhol's advice and get on with making more.

The 'gap' which Glass describes is a little different from that, though, isn't it? It's a more general falling short of our own aspirations, not just in a specific artistic creation but all of them. But again there is nothing to be done except to keep on. If we don't actually make the art /do the writing, it can never improve. If we do, we may not think so beforehand but it almost certainly will.

One of the most exciting things about being involved in a community like Poets United is to see the development in people's work over time when people do keep writing. Yet we don't give each other in-depth criticism unless it's specifically requested; rather, we pay attention and give encouragement. The development comes because we keep practising our art.

Another thing that shows up is how different we all are, each with our own individual voice, so that there are many, many ways to write 'good poetry'. It becomes evident, too, that the degree of excellence will vary from poem to poem, even for the most consistent of us. Even my favourite, most admired poets will produce specific pieces which stand out above all the rest of their work. So if you find that some of your poems don't please you, be aware that this is a subjective and possibly temporary assessment.

Meanwhile, those who tell us to 'keep on keeping on' might just have a point!