Born on December 27th, 1797 in Agra, India Mirza Asadullah Khan Ghalib aka Mirza Ghalib is one of the most read and quoted Poets when it comes to Urdu Poetry.

His talent flowered at an early age and as such he ended up writing most of his poems at the age of nineteen, initially his ghazals conveyed the pain and ache of love but he expanded his horizon in the days to come.

Now, without further ado let us dive into the world of poetry which bloomed in the Mughal era. 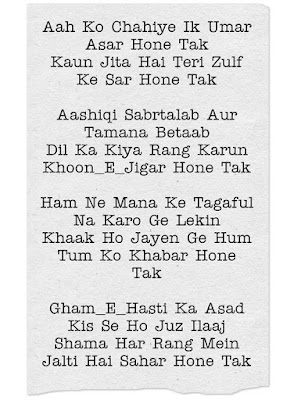 J.L. Kaul’s translation of the aforesaid is as under:

I know –
The lover may sigh the livelong day
To touch the loved one’s heart;
It takes too long to win thy love, and
can death outlive and hope to quell thy curls?
I know how long-suffering love must be;
Desire brooks no delay, and death
may summon me to pity by my complaint
I would rather seek and find thy love
I grant thou wilt not treat me unkindly
when lamentations reach thine ears
I know love’s fruition
I know death closes all, and doth all sorrow end;
and man, like candle, burns away,
until the coming of the day, until he finds release in death…
It dies as soon as it flares.

He  was a gifted letter writer. In one of his letters, he described his arranged marriage at the age of 13 as the second imprisonment after the initial confinement that was life itself. He viewed life as a continuous painful struggle which can end only when life itself ends. This is a recurring theme in his poetry.
I remember this ghazal as though it was yesterday, coming across it perhaps a million times during my college days in my syllabus, the translation is as following: 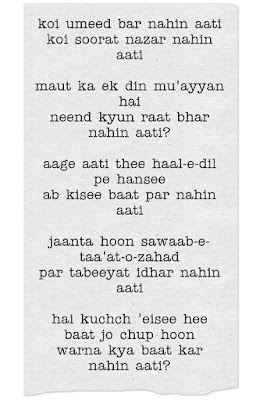 No hope comes my way
No visage shows itself to me

That death will come one day is definite
Then why does sleep evade me all night?

It is for these reasons that I am quiet
If not, would I not converse with you? 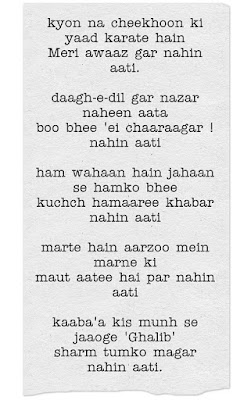 Why should I not remember you?
Even if you cannot hear my lament

You don't see the anguish in my heart
O healer, the scent of my pain eludes you

How will you face Mecca, Ghalib?
When shame doesn't come to you

Ghalib took the concept of ghazals and changed them from an expression of anguish in love to philosophies of life.

His critics accused him of writing in an ornamental style of Persian that was incomprehensible to the masses. But his legacy has come to be widely celebrated, particularly his mastery of the Urdu ghazal.


This selection of poetry and prose by Ghalib provides an accessible and wide-ranging introduction to the preeminent Urdu poet of the nineteenth century. Ghalib's poems, especially his ghazals, remain beloved throughout South Asia for their arresting intelligence and lively wit.
A liberal Muslim, Ghalib was a free-spirited man who lived right next to a masjid, yet hardly ever paid a visit. Such was his philosophy of life that even though he spent his day drinking and attending mushairas, he felt a deep connection with the almighty. Ghalib struggled throughout his life but he was aware that with his rebellious writing, he was paving way for the future generation.


He died in New Delhi on February 15, 1869. The house where he lived has been turned into a memorial and hosts a permanent Ghalib exhibition.

I hope you guys enjoyed the glimpse and insight into the life of one of my favorite Urdu Poets, do let me know your thoughts in the comment section below. I leave you with a poetry reading of "Aah ko chahiyeh ik umer asar hone tak," with English translation. Until next time!🌹 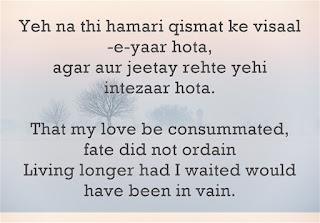 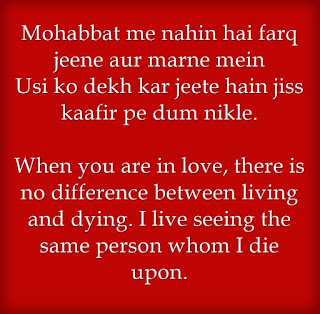