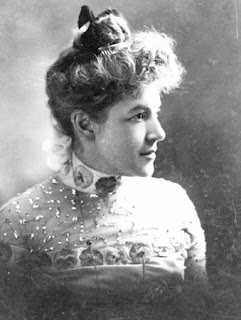 Laugh, and the world laughs with you;

Weep, and you weep alone.

For the sad old earth must borrow it's mirth,

But has trouble enough of its own.

Sing, and the hills will answer;

Sigh, it is lost on the air.

The echoes bound to a joyful sound,

But shrink from voicing care.

Rejoice, and men will seek you;

Grieve, and they turn and go.

They want full measure of all your pleasure,

But they do not need your woe.

Be glad, and your friends are many;

Be sad, and you lose them all.

There are none to decline your nectared wine,

But alone you must drink life's gall.

Feast, and your halls are crowded;

Fast, and the world goes by.

Succeed and give, and it helps you live,

But no man can help you die.

There is room in the halls of pleasure

For a long and lordly train,

But one by one we must all file on

Through the narrow aisles of pain.

Ella Wheeler Wilcox was an American author and poet, best-known for her collection Poems of Passion, and her autobiography, The Worlds and I. A poet for the common man, Wilcox wrote optimistically in plainly written, rhyming verse. None of her work was included in The Oxford Book of American Verse, but thirteen of her poems appear in Best Loved Poems of the American People; and “Solitude” and “The Winds of Fate” are included in Best Remembered Poems.

Her work was popular in the New Thought Movement; and by 1915, 50,000 copies of her booklet, What I Know About New Thought had been distributed.