The World Clock tells me it's past Friday in North America by now. I don't know why this post didn't appear when scheduled, but here it is at last — Rosemary


In any discussion of who might be the greatest Australian poet, the name of the late Judith Wright (1915-200) would have to be included. She left a substantial body of work, and I wish I had written any and all of it! She wrote great love poems, great nature poems, great poems about the history of our land, great poems on spiritual issues ... it’s hard to choose just one to share with you. My three absolute favourites are the love poem The Company of Lovers, the mystical Eli, Eli and this one:

Brown bird with the silver eyes,
fly down and teach me to sing.
I am alone, I will not touch you or move.
I am only thirsty for love
and the clear stream of your voice
and the brown curve of your wing
and the cold of your silver eyes.

Yet though I hung my head
and did not look or move,
he felt my thirst and was gone.
Though not a word I said,
he would not give me a song.
My heart sounded too strong;
too desert looked my love.

I chose Brown Bird because I am always pierced anew by its acute longing. At first glance it appears to be one of the nature poems she did so well — but it isn’t really.

Other poems by Judith Wright can be found here. Her autobiography, Half a Lifetime, is still available and so are her books of poetry, literary criticism, letters, essays and stories. (But if you Google her, be aware she’s not the Judith Wright who writes on food nor the one who writes about computers!) The complete list of her books is here. (Scroll down.) 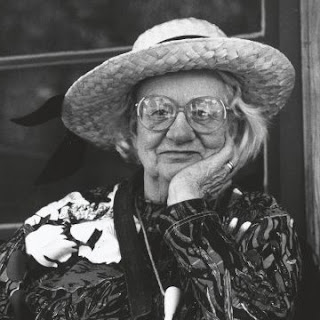 Email ThisBlogThis!Share to TwitterShare to FacebookShare to Pinterest
Labels: Brown Bird, I Wish I'd Written This, Judith Wright