There are certain verses—sometimes entire poems—
whose meaning even I don’t know. What I don’t know
sustains me still. And you are right to ask. Don’t ask me.
I don’t know, I tell you.
Two parallel lights
from the same center. The sound of the water
falling in winter from the overflowing drainpipe
or the sound of a drop as it falls
from a rose in the watered garden
very slowly on a spring evening
like the sob of a bird. I don’t know
what this sound means; nevertheless I accept it.
Whatever else I know I explain to you. I don’t neglect it.
But these things too add to our lives. As she was sleeping
I watched her knee squaring the sheet—
It wasn’t only love. That angle
was the crest of tenderness, and the fragrance
of the sheet, the cleanness and of the springtime completed
that inexplicable thing I sought, again in vain, to explain to you. 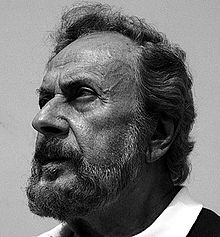 This comes from the book, The Fourth Dimension: Selected Poems of Yannis Ritsos, published by David R. Godine, Boston, 1977. I’ve owned a copy since close to its publication date. The piece I have chosen has long been a favourite of mine. I love its imagery and music. (For the latter we must thank the translator too.) But I could just as well have flipped through for any one of the shorter — but not too short — pieces. (Some are very short indeed, others extremely long, and all wonderful.) I would probably like to have written everything he ever wrote.

His is deep poetry that needs, deserves and rewards thought. You can't get it all in one quick read — though you can get a lot. The one I’ve chosen is perhaps the most straightforward. (Or is it just that I like ars poetica?) Yet I wouldn’t call him obscure — just deep.

The back cover blurb of this book says: ‘Yannis Ritsos is Greece’s finest living poet; indeed, Peter Levi in the Times Literary Supplement calls him “one of the greatest poets now living.” Twice nominated for the Nobel Prize, he has become a cultural hero in Greece.’

Imagine a culture where a poet is a hero!

He was born in 1909 and died in 1990. A member of the Greek resistance during World War II, he remained an activist.  Here is a detailed biography relating his writing to his life. And here is a blog of English translations of his poems by Scott King.

You’ll find his poetry at various other places online if you Google ‘Yannis Ritsos poems’. (Note also the variant English spellings of his first name: Yiannos and Giannes.) A new translation of his work by Greek poet Manolis was published in 2010, and is available from Amazon and Smashwords. Other volumes of his writing are available at Google Books.

Email ThisBlogThis!Share to TwitterShare to FacebookShare to Pinterest
Labels: I Wish I'd Written This, Yannis Ritsos