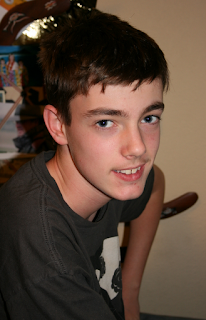 He has nothing to fear, not even the night
For he is no fierce lion nor even a tiger
But he is silly Koji, the goofy cat
Who plays with his toys and sleeps all day

This was written as a sound poem, and it reminds me strongly of Anglo-Saxon poetry with all that alliteration and the caesura in each line. I love Anglo-Saxon poetry and have always had a yen to write in that style, but I've never been able to bring it off successfully.

I fell in love with the language and tone of this piece, even before I came to the punch-line. Being a cat-lover, that clinched it for me.

As you can see, the poet is quite young. In fact he's the fifteen-year-old son of an old friend of mine, an Australian who now lives in California. Harrison was born in Australia himself, and brought up in the United States. I don't know him personally, but his proud Mum sent me several of his poems which he was recently required to write for school. I was impressed! So was his teacher, who gave him 100%.

I think they're exceptional. Many an adult poet might be proud of them, let alone one so young. You can read the others here, at my 'SnakyPoet' blog.  Harrison doesn't have a blog of his own at present, but gave me permission to share them on one of mine.

He did briefly have a blog when he was younger, to showcase some clever cartoons he created then. I hope he will reinstate it some day! I don't know if Harrison contemplates a career in the arts, but he certainly has some gifts in that direction.

And finally, here is a picture of the lordly Koji: 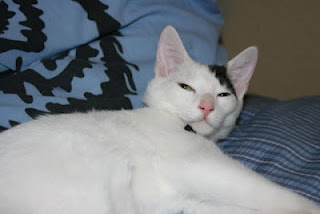 Email ThisBlogThis!Share to TwitterShare to FacebookShare to Pinterest
Labels: Anglo-Saxon poetry, Harrison Feain, I Wish I'd Written This, Koji