I have grown past hate and bitterness,
I see the world as one:
Yet, though I can no longer hate,
My son is still my son.

All men at God's round table sit
And all men must be fed;
But this loaf in my hand,
This loaf is my son's bread. 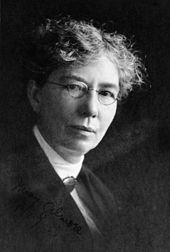 Dame Mary Gilmore was such an Australian icon that she is shown on the Australian ten dollar note and has appeared on a postage stamp. She is also the subject of a famous portrait by prize-winning artist William Dobell. In its notes on this portrait, the Art Gallery of New South Wales describes Gilmore as 'a distinguished humanitarian, poet, left-wing political activist and social reformer.'

She lived an eventful life which included her participation in the Australian expedition to Paraguay to try and form a 'New Australia' — a scheme which eventually failed. She worked as a schoolteacher when young, and later edited the Women's Page of The Australian Worker. Her work was featured in the influential weekly, The Bulletin. She was one of Australia's earliest feminists, and a generous promoter of other poets and artists.

She claimed to have been engaged to another famous Australian, Henry Lawson but there is some doubt about this. What is certain is that she married fellow Australian colonist William Alexander Gilmore in Paraguay and they had one son. They returned a few years later to live in Australia.

And there is so much more to say about her! Read her biographical details here, and anecdotes of her final years here.

In 1937 she was made a Dame of the British Empire for her services to Australian literature.

There is now a biennial (previously annual) literary award in her name, for a first book of poetry. (The first winner, in 1985, was Doris Brett for her book The Truth About Unicorns, the title poem of which was featured in this series on February 17 this year.)

A Google search for her books reveals more books about her than by her, and those by her can be very expensive. However you can read more of her poems here. Another I'm particularly fond of is Eve-Song.

The one I've chosen to share with you is one of her best-known. While I like its directness and see that it must have been painstakingly crafted within the outwardly simple form, I choose it above all for the sentiments. As we say nowadays, she really nails it!

Email ThisBlogThis!Share to TwitterShare to FacebookShare to Pinterest
Labels: Dame Mary Gilmore, I Wish I'd Written This, Mary Gilmore