Some like it cold, some like it hot,
Some freeze while others smother —
And by some fearful, fatal plot
They marry one another.

I think the above is my very favourite Ogden Nash poem — but I can't find it via Google. I did find what I thought was my second-favourite, the famous:

What a wonderful bird is the pelican.
His beak holds more than his belican.
I wonder how the helican?

— and I also found that it is commonly misattributed to the wonderful Nash but is really by Dixon Lanire Merritt. I am quoting both of these from memory, and it seems the second had a few more lines, too, in the original by Merritt.

On the other hand, it appears that one of my favourite Dorothy Parker poems (so I thought) is really by Ogden Nash:

Candy
Is dandy
But liquor
Is quicker.

He was greatly loved as America's foremost writer of light verse. Wikpedia tells me:

'The US Postal Service released a postage stamp featuring Ogden Nash and six of his poems on the centennial of his birth on 19 August 2002. The six poems are "The Turtle," "The Cow," "Crossing The Border," "The Kitten," "The Camel" and "Limerick One." It was the first stamp in the history of the USPS to include the word "sex," although as a synonym for gender. It can be found under the "O" and is part of "The Turtle". The stamp is the 18th in the Literary Arts section. Four years later, the first issue took place in Baltimore on August 19. The ceremony was held at the home that he and his wife Frances shared with his parents on 4300 Rugby Road, where he did most of his writing.' 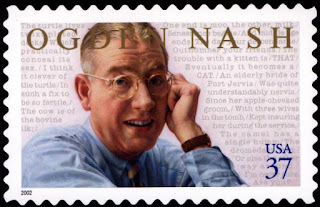 When I was a kid, my Dad had a book of Ogden Nash's poems. I have no idea what became of it, but it was one of my great favourites when I was growing up. As you can see, the short and pithy ones tickled my funny-bone most of all, but here is a longer, tongue-in-cheek piece I'd also love to have written — all the funnier for me because it concerns what are probably my favourite lines from Byron:

One thing that literature would be greatly the better for
Would be a more restricted employment by the authors of simile and
metaphor.
Authors of all races, be they Greeks, Romans, Teutons or Celts,
Can't seem just to say that anything is the thing it is but have to
go out of their way to say that it is like something else.
What does it mean when we are told
That that Assyrian came down like a wolf on the fold?
In the first place, George Gordon Byron had enough experience
To know that it probably wasn't just one Assyrian, it was a lot of
Assyrians.
However, as too many arguments are apt to induce apoplexy and
thus hinder longevity.
We'll let it pass as one Assyrian for the sake of brevity.
Now then, this particular Assyrian, the one whose cohorts were
gleaming in purple and gold,
Just what does the poet mean when he says he came down like a
wolf on the fold?
In heaven and earth more than is dreamed of in our philosophy
there are great many things.
But I don't imagine that among them there is a wolf with purple
and gold cohorts or purple and gold anythings.
No, no, Lord Byron, before I'll believe that this Assyrian was
actually like a wolf I must have some kind of proof;
Did he run on all fours and did he have a hairy tail and a big red
mouth and big white teeth and did he say Woof Woof?
Frankly I think it is very unlikely, and all you were entitled to say,
at the very most,
Was that the Assyrian cohorts came down like a lot of Assyrian
cohorts about to destroy the Hebrew host.
But that wasn't fancy enough for Lord Byron, oh dear me no, he
had to invent a lot of figures of speech and then interpolate them,
With the result that whenever you mention Old Testament soldiers
to people they say Oh yes, they're the ones that a lot of
wolves dressed up in gold and purple ate them.
That's the kind of thing that's being done all the time by poets,
from Homer to Tennyson;
They're always comparing ladies to lilies and veal to venison,
And they always say things like that the snow is a white blanket
after a winter storm.
Oh it is, is it, all right then, you sleep under a six-inch blanket of
snow and I'll sleep under a half-inch blanket of unpoetical
blanket material and we'll see which one keeps warm,
And after that maybe you'll begin to comprehend dimly
What I mean by too much metaphor and simile.

You can find more of Nash's poems here and a free down-loadable pdf file here. Also there is a printed selection of his poems on Amazon.

Email ThisBlogThis!Share to TwitterShare to FacebookShare to Pinterest
Labels: I Wish I'd Written This, Ogden Nash