Now dreams
Are not available
To the dreamers,
Nor songs
To the singers.

In some lands
Dark night
And cold steel
Prevail
But the dream
Will come back,
And the song
Break
Its jail. 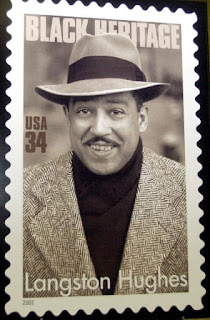 Hughes's biography at PoemHunter.com describes him as 'an American poet, social activist, novelist, playwright, and columnist' and says, 'He was one of the earliest innovators of the then-new literary art form jazz poetry. Hughes is best known for his work during the Harlem Renaissance. He famously wrote about the period that "Harlem was in vogue." '
I wouldn't know about that last, not being intimately acquainted with New York history;* but it seems to me he wrote of the oppression for which this poem is titled and of the longing for justice and freedom. He did so in simple, direct, powerful, often beautiful language.

He was a master of rhyme, which he habitually used. Sometimes the rhymes seem obvious, sometimes not so much, but never forced or obtrusive.
His poems were always sad, and sometimes bitter, angry or defiant — with reason, when you consider the subject matter of intolerance and suffering. This particular poem is sad like the rest, and the message unequivocal, yet it carries a strong assurance of hope. And although he had issues with the United States, his country did honour him by putting his face on a stamp, as you see!

At PoemHunter you will find 93 more of his poems. They tend to be short, so it's not an arduous read. And there are books galore at his Amazon page.

* I belatedly discover that Harlem Renaissance was a cultural movement, involving jazz poetry among other things.

Email ThisBlogThis!Share to TwitterShare to FacebookShare to Pinterest
Labels: I Wish I'd Written This, Langston Hughes