In Queen Street
on Friday night
— lights blooming but
already pomegranate-heavy
with Adult Entertainment —
a yellow balloon
was hopping around
among herds of cars,
holding its helium soul together,
two lives left,
to the music of singing ironclads,
hopping, filled with its yellow
balloon-fright
before wheels
and behind wheels,
incapable of salvation
incapable of destruction,
one life left,
half a life left,
with a molecular trace of helium,

using its last resources,
its string searching
for some child's hands
Sunday morning.

(From Interferon, or On Theatre, trans. by Danan Habova and David Young.) 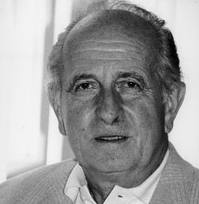 Czech poet Miroslv Holub was also a scientist, specifically an immunologist, who liked to use scientific metaphors in his poetry. Wikipedia tells us that his work, being unrhymed, lends itself to translation, has been translated into over 30 languages, and is particularly popular in the English-speaking world.

The Poetry Foundation credits him with holding science as his vocation and poetry as his pastime. He himself saw no conflict between science and poetry, but recognised that many of his scientific and his literary friends regarded each other with suspicion.

Much of his poetry could be taken politically, as I'm sure it was meant to be. I find it quite dark, though alleviated by sardonic humour. I like this one that I've chosen here for its lighter mood. The image of the bobbing balloon is so strong that I long for the happy ending in which the string finds the child's hands.

I also love the fact that the poem is one sentence.

A number of Holub's books are listed on Amazon. There seem to be not many of his poems online, but those few worth reading: The Door, Creative Writing (with audio), The Heart.

(Don't confuse him with the actor or singer of the same name.)

Email ThisBlogThis!Share to TwitterShare to FacebookShare to Pinterest
Labels: I Wish I'd Written This, Miroslav Holub