The sea is calm tonight.
The tide is full, the moon lies fair
Upon the straits; on the French coast the light
Gleams and is gone; the cliffs of England stand,
Glimmering and vast, out in the tranquil bay.
Come to the window, sweet is the night-air!
Only, from the long line of spray
Where the sea meets the moon-blanched land,
Listen! you hear the grating roar
Of pebbles which the waves draw back, and fling,
At their return, up the high strand,
Begin, and cease, and then again begin,
With tremulous cadence slow, and bring
The eternal note of sadness in.

Sophocles long ago
Heard it on the Ægean, and it brought
Into his mind the turbid ebb and flow
Of human misery; we
Find also in the sound a thought,
Hearing it by this distant northern sea.

The Sea of Faith
Was once, too, at the full, and round earth’s shore
Lay like the folds of a bright girdle furled.
But now I only hear
Its melancholy, long, withdrawing roar,
Retreating, to the breath
Of the night-wind, down the vast edges drear
And naked shingles of the world.

Ah, love, let us be true
To one another! for the world, which seems
To lie before us like a land of dreams,
So various, so beautiful, so new,
Hath really neither joy, nor love, nor light,
Nor certitude, nor peace, nor help for pain;
And we are here as on a darkling plain
Swept with confused alarms of struggle and flight,
Where ignorant armies clash by night. 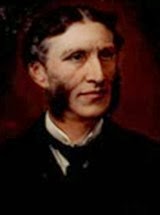 Because I love this poem, I also love this picture of Arnold, which seems to me to reflect the same emotional depth and restrained intensity.  Described in Wikipedia (see link above) as 'a British poet and cultural critic who worked as an inspector of schools', his poetry has attracted divergent opinions. Some — myself included — consider him one of the three great poets of the Victorian era, along with Tennyson and Browning. I first encountered him at High School, in a volume called Victorian Poets, which contained selections from those three. That's when I first fell in lasting love with this poem.

In his day his poetry was not so greatly admired as that of his contemporaries; and there are critics today, too, who consider it inferior by virtue of being derivative, or simply reflecting the mindset of his time. You know what — I don't care. I have no pretensions to being a scholar; I just love the music in this piece. The cadences, to borrow his word. I love the way he uses his command of the sounds and rhythms of language to create first the calm scene he describes, then the emotional torment at finding the human spirit so much at odds with this. He is having a crisis of faith, no less genuine in that this particular internal conflict was apparently a common one in his era. I like the way he resolves it by clinging to human love.

More of his poems are at PoemHunter. I found some of his books (rather expensively) at eBay and Booktopia, and both poetry and prose at Amazon.
Posted by Rosemary Nissen-Wade