Still hangs the hedge without a gust,
Still, still the shadows stay:
My feet upon the moonlit dust
Pursue the ceaseless way.

The world is round, so travellers tell,
And straight though reach the track,
Trudge on, trudge on, 'twill all be well,
The way will guide one back.

But ere the circle homeward hies
Far, far must it remove:
White in the moon the long road lies
That leads me from my love. 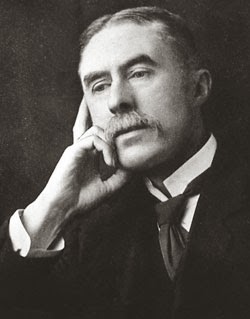 Simply, this is one of my favourite love poems, which captured my imagination when I was in my teens and has never lost its magic and pathos for me. In simple language the poet creates lyrical music, beautiful images, and intense emotional longing.

Englishman Alfred Edward Housman was a great classical scholar who became a Professor of Latin at Cambridge University. Many critics consider it somewhat surprising that this same man wrote poetry noted for its sweetly simple lyricism, set largely in the English countryside. His best known work was A Shropshire Lad, which is still very well-known. His language continues to speak to us today. The poem I've chosen is taken from A Shropshire Lad, and there are a number of others in it which I love too. I don't think Housman ever wrote a bad poem (though most of the great poets did occasionally, just like the rest of us).

You can read or download A Shropshire Lad free from Project Gutenberg or read Housman's poems at PoemHunter. This one has been set to music, and you can listen to it on YouTube  — a version I don't care for. I see that on Amazon you can buy Bryn Terfel's recording for 99¢, which may or may not be better (I haven't listened). The YouTube treatment was too operatic for me. I love opera — but I don't think it suits this simple, lovely poem. However, taste is subjective of course, in both music and poetry. I think Housman's words can stand alone, and I hope you do too.

It's worth noting that, in a time and place when male homosexuality was not only socially unacceptable but punishable by law, Housman, himself homosexual, wrote and published several very fine poems deploring this extreme prejudice and its damaging effects. While he didn't spell things out explicitly, the meaning was there to be discerned, but was usually missed during his lifetime — as discussed in the PoemHunter biography.  You'll find those poems, too, in A Shropshire Lad.