A free interpretation of the Chauraspancasika,
by E Powys Mathers

Even now
My thought is all of this gold-tinted king's daughter
With garlands tissue and golden buds,
Smoke tangles of her hair, and sleeping or waking
Feet trembling in love, full of pale languor;
My thought is clinging as to a lost learning
Slipped down out of the minds of men,
Labouring to bring her back into my soul.

Even now
If I see in my soul the citron-breasted fair one
Still gold-tinted, her face like our night stars,
Drawing unto her; her body beaten about with flame,
Wounded by the flaring spear of love,
My first of all by reason of her fresh years,
Then is my heart buried alive in snow.

Even now
If my girl with lotus eyes came to me again
Weary with the dear weight of young love,
Again I would give her to these starved twins of arms
And from her mouth drink down the heavy wine,
As a reeling pirate bee in fluttered ease
Steals up the honey from the nenuphar.

Even now
I bring her back, ah, wearied out with love
So that her slim feet could not bear her up;
Curved falls of her hair down on her white cheeks;
In the confusion of her coloured vests
Speaking that guarded giving up, and her scented arms
Lay like cool bindweed over against my neck. 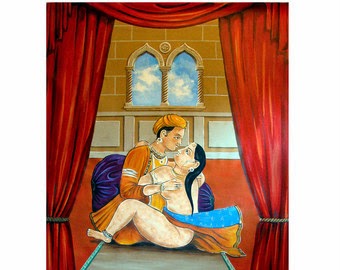 As it goes on, it reveals the story of a poet in love with a princess, awaiting execution after being caught with her. It is supposedly true, but there is quite a lot of mystery about it. Firstly, the name is sometimes given without the first "s", or even as Caurapañcáciká. And the poet's name is sometimes given as Bilhana, sometimes as Chauras. This version, interestingly enough, seems to imply both! However, more scholarly sources tell us that the poet's name was indeed Bilhana, and the title means "fifty verses of a love thief" (or, some say, "fantasies of a love thief").

This version is the one I discovered in my teens, in my parents' copy of An Anthology of World Poetry, published by Cassell in 1929 (which has long been my copy).  I've never tired of this gorgeous poem. It might be more accurate to say I have never tired of this translation, which apparently owes a lot to Mathers. Not only did he interpret it in ways that don't always agree with other translations, he seems to have actually added in things that were not in the original. (For one thing, this is several verses longer than any other translation.)

But hang on — which original? I have now learned there were two versions: one Kashmiri, the other Southern Indian.

This love poem of fifty stanzas was written by the Kasmiri poet Bilhana Kavi in the 11th century. The story runs that the Brahman Bilhana had a clandestine love affair with Princess Yaminipurnatilaka, the daughter of King Madanabhirama. He was discovered and Bilhana wrote this poem in prison before he learned whether he would be executed or banished. The historic outcome is unknown, which adds to the readers' suspense.

Initially this poem was transmitted orally, and by the time it was written down, there several variations: the South Indian versions tend to have a happy ending, and the Northern, Kashmiri, recension has an open ending."

Some people say it was truth, some think it was fiction. As noted above, the poem was supposed to have been written during the time the poet was waiting to die. I think of it as one very long, wakeful night; some accounts suggest it was days or weeks. The "happy ending" people say that the king was so moved by the poetry that he spared the poet's life; others disagree. The version I share with you must be the northern one; it ends, of course, before the poet is either killed or pardoned. As it ends he is expecting to die, which makes it extremely poignant. And he is brave, like all good heroes. His princess is brave too.

True or fictional, it's a heck of a story — romantic enough for us girls, sexy enough (I would think) for the guys, and even philosophical enough for the thinkers among us. And oh, the language! I have no idea what it's like in Sanskrit, but Mathers's English is lush and musical, and conjures up the notion of something exotic. Here you can read Mathers's own explanation of what he was attempting.

There have been other translations. You can look at one here, and a few excerpts from another here. Scholars seem to think the Mathers is less accurate than others. I still love it best for its over-the-top romanticism. (If you can't be over-the-top about grand passion...)

It is in book form on Amazon and if you Google "Black Marigolds free download" you'll find exactly that, in pdf.

There is also a YouTube reading of an abridged version of the Mathers translation, by Tom O'Bedlam. Don't go there! The man's voice sounds elderly and the tone is passionless — could anything be more wrong for this poem?

The picture I've used is a free download, and is actually from the Kama Sutra — which seems appropriate! (Just mentally change the blue on that skirt she's barely wearing to green, to fit the poem.)
Posted by Rosemary Nissen-Wade