Beth,
Next bet, Everest! Ever been
there? They tell me extreme,
WTC-sheer. Yes! Wherever
there’s extreme, there’s me! Tell

Helen,
When we met, speech deserted
me... Never expected the sweetness,
the perfect tenderness... Melt me,
tell me the deepest secrets... Let me

September 11.
The breeze sweeps the letters.
The letters never sent.

I couldn't make up my mind what to use today, though there were several possibilities. I procrastinated ... then I came across this on facebook and knew it was the one I'd been waiting for.

Perhaps others of you will already have seen it on facebook too; it's still worth sharing here for those who haven't. With what magnificent understatement it evokes that massive and sudden interruption to so many individual lives. It's an original approach, which doesn't tell us how to feel or how the poet feels. There is no need. We all know in any case what we did and do feel about this particular tragedy. In these imagined, different fragments, though — presented almost without comment — somehow there is great tenderness. The brief framing verses, with the merest mention of the breeze, the sentences never ended and the letters never sent, provide sufficient poignancy in just those few unadorned words. 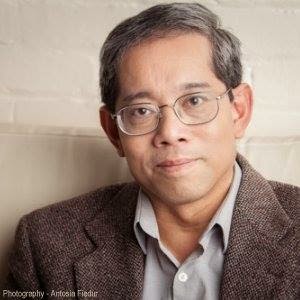 Whether or not you've seen this poem, probably many of you have encountered Sam and his poetry — on twitter @semaphore, on facebook, at his 'Semaphore' blog, or as a presenter at dVerse for some months, where he taught us well about traditional forms (and cured my fear of the sonnet). I first became aware of him in 2009 when Collin Kelly and Didi Menendez compiled a collection by poets on twitter, which included us both. (It was issue #24 of a magazine called OCHO). Ever since then I've been a huge admirer.

You can always count on him for originality. Even when he is using traditional forms, he finds new ways to use them, such as writing a sonnet which is also a ghazal. And I find his use of language very beautiful.

He has not merely one distinguished career but several simultaneously, in literature, science and business. He also writes music. Here, concentrating on the literary, are the impressive details taken from his facebook profile:

Sam has won awards for his poetry in the US, Asia, the UK, and Canada. At 19 he was the youngest to win a Palanca Award for Literature for his manuscript 'Pacific'. At 24 he was a winner in the BBC and the UK Poetry Society’s National Competition for 'Hush'.

The League of Canadian Poets included 'A Mother', 'Concatenations' and 'Savannah' in its award anthology series. In 2000, an analysis of 'A Mother' was included in provincial examinations.

In 2002, he accepted an Innovative Technology Achievement Award from the Digital Literature Institute for ebook software development.

Until 2009, Sam took a hiatus from literature to write music and lyrics as 'Sam Parr', and for other musicians and bands. His music garnered thousands of followers on MySpace, and played in front of thousands more in live venues.

In 2011, he placed 12th in a Facebook reader's poll of favourite classic and modern poets; a poll topped by William Shakespeare, Robert Frost and Pablo Neruda. Samuel was the #2 favourite living poet on the list, behind Leonard Cohen.

In 2011, Sam was also named to the Top 10 List of Most Influential People on Twitter That You Don't Know. Also in 2011, his poem "Radar" was shortlisted for the ARC Poem of the Year.

In 2013, Sam was tapped as a juror in the Scholastic Writing Awards, for Poetry. "Sonata Vampirica" was shortlisted for the Elgin Award.

Over 2013-2014, he branched into support for independent filmmakers, helping fund nearly 50 short and feature films; becoming Associate Producer for "Trust Me", "Splinter", "Decon", "Rest Stop", "All the Marbles", "Mai Mai Miracle"; and Executive Producer for "Closure", "Flower Girl", "Dorsal", "A Letter from Vienna", "Butterfly", "Little Fishes", and "A Murder of Crows".

His music continues to be produced and performed by independent musicians, notably Friedrick Ryan and Paul Grai.

By day, Sam is a high technology business executive.

His poems have been featured in Combustus, Existere, The Malahat Review, Metazen, MiPoesias, OCHO, Poets and Artists, Undercurrents, Scholastic, Seedpod, and elsewhere. He has written a regular column on poetic form for the Dverse Poetry online blog, and edits The Semaphore Anthology, a journal of poetry he wishes he'd written, but didn't.

Lately he has been bursting into print as a fiction writer. His Amazon page connects you to both his fiction and his poetry.

You can sign up here to his newsletter to keep up with his latest literary endeavours, and even receive gifts of new reading matter now and then.

Samuel Peralta has become one of my favourite poets. He's also a very nice person, generous to others and showing no signs of the conceit to which he might seem entitled.

Email ThisBlogThis!Share to TwitterShare to FacebookShare to Pinterest
Labels: 9/11, I Wish I'd Written This, Samuel Peralta, Semaphore